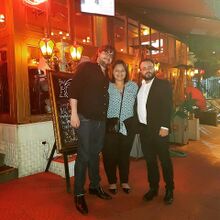 King Rafael of Luna, his wife Queen Letizia and Emperor Oscar I.

The foreign relations of the Karno-Ruthenian Empire are implemented by the Ministry of Foreign Affairs. The Emperor-King and the prime ministers of each part of the Empire play a role in setting policy, and the Minister of Foreign Affairs have a voice and are the one who develop this policy.

Since its founding, the Kingdom of Ruthenia and after the Karno-Ruthenian Compromise of 2016, the Karno-Ruthenian Empire and its government pays special attention to foreign affairs. One of the first ministries of government was precisely the Ministry of Foreign Affairs, which was founded on the same day that the kingdom, on 19 November 2014.

Diplomatic relations are conducted by the Minister of Foreign Affairs, but the leadership of Foreign Affairs is in practice, led by His Imperial and Royal Majesty, the Emperor-King. Karnia-Ruthenia monthly studies and develops diplomatic relations with several micronations around the world, maintaining cordial relations with everyone and accounting for only four international incidents, only two of whom suffered from more serious action by the government.

Karnia-Ruthenia is a significant political power, especially in the Brazilian sector and a potential key player on the world stage. Karnia-Ruthenia's foreign policy reflects its role as a regional power and a potential world power and is designed to help protect the country's national interests, national security and ideological goals with an independent foreign policy, aimed to strengthen ties with other South American micronations, while engage in diplomacy with micronations in North America, Europe and Asia shaped by a unique position as a multicultural, multiethnic and multilingual micronation.

Over the years, the Empire has developed very close and special relations with the United Provinces of Mauricia, the Republic of Rino Island, the Imperial Grand Duchy of Lundenwic, the Great Republic of Delvera and the Virtual State of Drakonberg. More recently, the Empire has established intense and equally special contacts with newer projects, such as the Lateran States[1], Kingdom of Quinta Velha and Kingdom of Luna.

Nations which Karnia-Ruthenia has signed treaty of mutual recognitionEdit

Nations which Karnia-Ruthenia has informal relationsEdit

This is a list of diplomatic missions of Karnia-Ruthenia. Its network of embassies and consulates abroad reflect its foreign policy priorities in Europe, and in neighbouring countries that the Empire has historic links to. The list also includes influential micronations with exchange of ambassadors, even if only nominally or only acting virtually.

Decree granting the Imperial Embassy the status of "Most Loyal", Rino Island, 12 March 2020.

Oscar I, Lucas of Oranje, Wilhelm III and Ferdinand of Vyšehrad.

A summit is a meeting of heads of state or government, usually with considerable media exposure, tight security, and a prearranged agenda. Notable summit meetings attended by the Imperial and Royal diplomatic corps include presence in online forums to personal visits or meetings in a common place.