The House of Kürzung is a royal house of dukes of Karnia-Ruthenia. The family arose in the area of Minas Gerais in the late XIX century. Since 20 February 2013, the House of Kürzung, at that time know simply as Machado Family, established the Principality of Axvalley, ruling it as Governor Comissioner until 13 July 2017, when they assumed the surname of "Kürzung" and maintain the control over Axvalley as their dukes. After the Treaty of Kürzung, the "Kürzung-Machado Family" became a noble house within the Karno-Ruthenian Nobility. 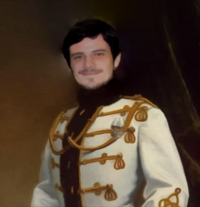 The official seat of the House of Kürzung is the Francis Palace. Built in the beggining of 20th century, from 2013 to 2017, it was the seat of the Governor Comissioner of the Crown Dependency of Axvalley, then part of Austenasia, thereafter the seat of the ruling family of Axvalley. After the signing of the Treaty of Kürzung that merged the duchy to Karnia-Ruthenia, the Palace continued as an administrative center, remaining the formal seat of the Court at Axvalley and the duke's workplace, as much as his official residence.

Members of the Family have their own crests, monograms and standards to represent them or their presence somewhere over the duchy and foreign countries. The use of them are regulated by the Emperor-King's Own Office and by the Imperial and Royal Academy of Heraldry of Karnia-Ruthenia.

Retrieved from "https://karniaruthenia.miraheze.org/w/index.php?title=House_of_Kürzung&oldid=6488"
Categories:
Cookies help us deliver our services. By using our services, you agree to our use of cookies.