Imperial and Royal Warrant of Appointment 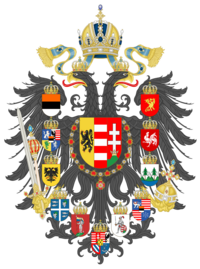 A Purveyor to the Imperial and Royal Court is allowed to publicly display the imperial eagle.

An Imperial and Royal Warrant of Appointment is issued to vendors who supplied goods or services to the Imperial Court of Karnia-Ruthenia. The warrant is normally an imperial decree, which enabled the supplier to advertise the fact and thus lend itself prestige.

Suppliers continued to charge for their goods and services and the appointment is given only to those deemed of the highest quality to be worth to receive the honour upon personal approval of the monarch. The warrant may be advertised on company letter-heads and products by displaying the coat of arms or the heraldic badge of the imperial eagle. Underneath the coat of arms would usually appear the phrase "Purveyor to the Imperial and Royal Court". Depending on where the supplier is located within the Empire, it could be adapted into the local language such as "Fornecedor da Corte Imperial e Real" in Portuguese, or "Αυτοκρατορικό και Βασιλικό ένταλμα διορισμού" (Aftokratorikó kai Vasilikó éntalma diorismoú) in Greek.

The warrant is given to the companies or a tradeperson. The warrant is given as a supplier for the overall court. However, personal suppliers to the emperor or the empress were given a higher warrant as "Purveyor to the Imperial and Royal Chamber". It is possible for a supplier to receive both warrant forms for exceptional quality of services and goods. A warrant sent a strong public signal that the holder supplied goods of a quality acceptable for use in the Imperial and Royal Household, and by inference, inspired the confidence of the general public. At a time when product quality was a public issue, a royal warrant imbued suppliers with an independent sign of value.

Warrants are currently granted for the Emperor-King, and signifies there is a satisfactory trade relation in place between the grantor and the company and that the goods nominated are suitable for supply to the Imperial and Royal Household. The grantor is empowered to reverse his decision, and therefore withhold a grant. An Imperial and Royal warrant does not imply that suppliers provide goods or services free of charge. Royal families of the United Kingdom, Netherlands, Belgium, Luxembourg, Monaco, Denmark, Sweden, and Japan among others allow tradesmen to advertise patronage.

Some warrant holders were from abroad. Companies that have received the honour are Umarex Sportwaffen GmbH & Co. KG[1], Smirnoff[2] and MicroStore [3].

Retrieved from "https://karniaruthenia.miraheze.org/w/index.php?title=Imperial_and_Royal_Warrant_of_Appointment&oldid=6928"
Categories:
Cookies help us deliver our services. By using our services, you agree to our use of cookies.