Difference between revisions of "Infantes of Lomellina" 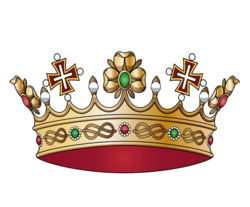 Crown of the Lomellinian Infantes

The Lomellinian Infantes or simply called Infantes (Male) or Infantas (Female) is the title and rank given to the sons or siblings of the prince, sometimes with the exception of the heir apparent to the throne who usually bears a unique princely or ducal title. The wife of an infante is accorded the title of infanta if the marriage is dynastically approved by the prince and the princess of Lomellina.

Husbands of born infantas doesn't obtain the title of infante through marriage (unlike most hereditary titles of Spanish nobility), although occasionally elevated to that title de gracia ("by grace") at the sovereign's command. Generally the infantes can be grated all sorts of high political domains such as, Grand-Dukes, Dukes, Counts or Viscounts.

Retrieved from "https://karniaruthenia.miraheze.org/w/index.php?title=Infantes_of_Lomellina&oldid=1234"
Cookies help us deliver our services. By using our services, you agree to our use of cookies.