The Karno-Ruthenian nobility (Karniareichischer Adel) is a status group, part of Karno-Ruthenian society, but they do not retain any specific privileges. Any noble living in the Ruthenian-ruled lands, and who owed their allegiance to the dynasty and therefore to the Emperor-King, is also considered part of the aristocracy.

This applied to any member of the Karno, Ruthenian, Libertian, Horvatian, Letzembourguish and other nobilities in the Imperial and Royal dominions. Attempting to differentiate them can be difficult: a noble from Libertia, for instance, such as the Duke of Libertia, could call himself a Libertian noble, but he also rightfully belonged to the Karno-Ruthenian nobility.

Two categories among the nobility may be distinguished: the Hoher Adel, the historic nobility that owed allegiance to the head of the dynasty and hold the higher titles, and the Niederer Adel, the new aristocracy, ennobled at any point by the Emperor-King and which holds lower titles of nobility. 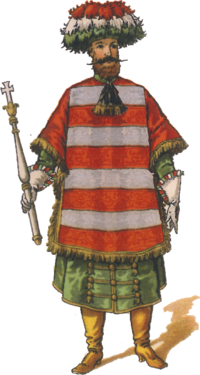 Karno-Ruthenian herald, inspired by the works of Hugo Gerard Ströhl.

The Kingdom of Ruthenia, founded as a monarchy, admitted as a logical attitude to reward those who helped in its foundation with titles of nobility. Since the foundation of the kingdom, the King of Ruthenia - later Emperor of Karnia, had the right to bestow titles and ranks - and did it effusively. With the foundation of the Empire, it would be the prerogative of the Emperor-King to create and revoke titles of nobility, but only a few territorial rulers within the Empire also had this right.

However, from the beginning, the aristocracy had great influence at the court and thus played an important role in politics and diplomacy. The practice of elevate individuals to nobility still remains, although less frequently. With the expansion of the Empire, nobles from previously sovereign states such as Libertia or Horvatia were also recognized by the authorities and were allowed to keep their titles and rights.

The first nobles of the newly established Monarchy were those who had allied with Oscar I at some point of his reign. He initiated the ranks of nobility and the system of honors, also founded numerous orders of knighthood, most of which still exist. Most of this honors are purely honorary and non-hereditaries. There are two broad classes of nobility: higher and lower nobility. There is considerable overlap between these classes in practice, but there are also fundamental differences between them. Over these two c1asses, is the Imperial Family, which is sometimes considered part of the higher nobility, but is also separate from and above it.

The members of nobility is the core of the national aristocracy. They are usually charged with the greatest responsability (also governmental responsibility), and are among the most powerful and influential people in the Empire. Many of them are members of old and powerful families that have formed the backbone of the nationa identity. Noble titles are rarely granted, and only in response to extraordinary service to Karnia-Ruthenia. Examples include members of military who leads the Karno-Ruthenian Armed Forces to victory in some mission, a local political leader instrumental in bringing his micronation into the Empire and so on. Simple personal achievement is not enough; the new noble must have performed a great service to the Empire as a whole, far beyond the normal call of duty.

Outsiders observing the system of nobility are often puzzled by the "lack of use" of aristocrats. Nobles run the imperial bureaucracy, they oversee the Imperial and Royal Court, they command the Armed Forces and so on. All of these roles are certainly important. Yet it's true that talented commoners could manage all of these routines just as easily, without any need for inherited privilege or ceremony. Surely the Monarchy could dispense with its aristocracy altogether? The key to understanding the aristocratic system lies in observing the core virtues of the Imperial Aristocracy: loyalty and personal initiative.

A noble may be hopeless as an administrator, soldier, diplomat or jurist, but in theory he has been trained or at least is prepared from birth to be staunchly loyal to the Emperor. He has also been taught to be comfortable acting on his own initiative, using whatever power is available to him. A noble who never performs any other function for the Empire is still expected to teach his children these virtues, for the day when they may be called to serve.

The noble virtues are critical because the Imperial aristocracy's true function is not to meet the demands of day-to-day routine. Instead, the aristocracy exists to ensure that there is a pool of people capable of responding to emergencies.

The Empire is too vast and too thinly spread to be controlled from the center. When a crisis erupts, the Monarchy needs to know that one of its trusted servants will be on the scene as soon as possible. That person must have the authority, initiative, and loyalty necessary to resolve the situation in accordance with Imperial interests. If the Empire can't rely on this, its very survival will soon be in danger.

There may be many ways for a society to ensure that loyal, agressive people with authority will respond to every crisis, but the mechanism chosen by the Karno-Ruthenian Monarchy was a hereditary aristocracy. In the end, the noble's role is to prevent the Empire from flying into thousands of squabbling fragments.

All nobles arc expected to adhere to certain general standards of behavior. Nobles should obey the law, respect those in authority above them, show concern for those below them, and in general act in the best interests of the society. This, of course, is what is expected of all citizens, but nobles are held to a higher standard, by their own peers and by the general public. Indeed, the higher the noble's rank, the higher the standard to which he is held.

The purpose of the early training and education of nobles is to create a body of loyal administrators and functionaries, who can be trusted to act only in the best interests of the Empire and its citizens. As with almost all lofty goals, this one is not completely successful. Over the years, careful selection has produced a group of high nobility that can usually be relied upon to act in the best interest of the Empire. The system places a great deal of faith in the behavior of this select group, and rewards it for supporting the status quo.

This system is strong enough that as long as the upper strata of the nobility remain loyal, a certain degree of "misbehavior" can be tolerated among lesser nobles. Outright criminality cannot be tolerated, of course, but a lowly baron can get away with acts that a duke would never dream of. Nobles with governmental duties are usually held to stricter standards and a lot depends on not getting caught in the act, what almost always is the case.

Perhaps the most commonly violaled tenet of good behavior is the use of position and connections provided by a title for personal gain. Minor government officials sometimes take unfair advantage of their jobs to benefit their families. Occasional while-collar crimes call be comitted with relative impunity, provided that the perpetrator takes care not to get careless. Repeated offenses increase the chance of discovery, of course, and the higher up the chain the greater the risks of capture and severe punishment.

A common belief among non-nobles (and a major tenet of anti-monarchist propaganda) is that the nobility is not subject to the same laws as the rest of the citizenry. Nobles are often able to sometimes make use of their connections to avoid harsh penalties. Still, the laws apply equally to all citizens, noble or not. However, punishment for nobles is usually much more severe, involving the loss of all privileges and, sometimes, of political and social rights.

The members of the Imperial Family, while part of the nobility through any lesser titles they may hold, are not ordinary nobles. Aside from the Emperor-King, they have no formal governmental duties, although they may act as informal "extensions" of the imperial presence for ceremonial purposes. Members of the Imperial Family are subject to a special law regulating their status, civil rights, marriages and order of sucession.

Inspired by the Austrian nobility, it is divided into two categories: the higher nobility (Hoher Adel), and the lower nobility (Niederer Adel):

The titles considered as Higher Nobility, being able to use the suffixes “von”, “zu” or “von und zu”:

Titles considered as Lower Nobility, being able to use the suffixes “von”, “zu” or “von und zu”:

Retrieved from "https://karniaruthenia.miraheze.org/w/index.php?title=Karno-Ruthenian_Nobility&oldid=8399"
Categories:
Cookies help us deliver our services. By using our services, you agree to our use of cookies.