The Lomellinian Army is led by the General Marzio Fossati and includes: 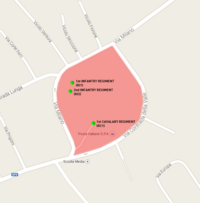 The regiments in Castello di Valle.

The Lomellinian Army Base Structure Units work as administrative bases responsible for the training and organization of the operational units of the army's formations, military zones and general support forces. For historical reasons most of the base units are called regiments and are associated with an arm of service. By arm of service, these units are:
Cavalary:

Retrieved from "https://karniaruthenia.miraheze.org/w/index.php?title=Lomellinian_Army&oldid=175"
Cookies help us deliver our services. By using our services, you agree to our use of cookies.