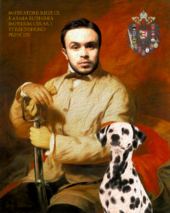 Reichshund ("dog of the Empire") is an informal term used in Karnia-Ruthenia to refer to dogs of the high nobility, especially Dalmatian dogs, much appreciated by the Imperial Family. The term was also used in Imperial Germany, for Reichskanzler Otto von Bismarck's dogs and more generally for similar dogs, particularly Great Danes in this case. 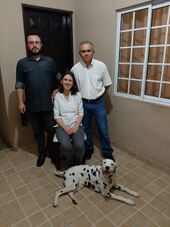 Although there are a few dozen citizens with their own dogs, the trajectory of dogs in Ruthenia is a particular story. Long before the foundation of the Kingdom, the family that came to rule the Empire was the creator of many dog breeds, including Dobermann, Sighthound and Pekingese. After the death of Archduchess Denise's last dog, a year before the birth of Oscar I, the family decided to no longer have dogs, choosing birds and ornamental fish and leaving larger animals for what we now know as Alto da Solidão, the then country estate, which counted and still possesses considerable quantity of cattle and horses.

After almost three decades without pets in Persenburg, Oscar I adopted from Kennel Spot One, a Brazilian reference in the creation of the Dalmatian breed, a dog called Prince, a little more than three years old, victim of negligence of the previous owner. Despite the fact that he was the first Dalmatian to inhabit the imperial capital, we can not say that there was no enthusiasm on the part of the Emperor on the race: he studied the race for three years before acquiring one. Although he wanted a puppy, Prince's story captivated the Imperial Family, which promptly offered to receive him, which occurred on 14 February 2019. Now, Prince is the Emperor's companion dog. Although he has an irreplaceable pedigree, counting on great champions of the race in Brazil and abroad, he does not participate in tournaments and is usually seen in the company of its owner, in long daily walks. His breeder was made Baroness on April 2019[1].

Otto von Bismarck with Tyras II and Rebecca in 1891.

Germans became able to own dogs freely as a result of the democratisation following the revolution of 1848. Keeping dogs became increasingly fashionable as the 19th century continued, and people in public life often did so as part of their image.[2]

Bismarck reportedly took a blonde Great Dane called Ariel with him when he entered the University of Göttingen in 1832.[3] He continued to keep Great Danes throughout the rest of his life. His favourite was Sultan (shortened to 'Sultl' to avoid diplomatic repercussions with Ottoman Empire[4]); on his deathbed he berated himself for not treating the dog better.[2]

Sultan was a gift from the Bavarian Count Maximilian Karl Theodor von Holnstein.[5][6] After Sultan's death on 26 October 1877, Bismarck could only be consoled by the gift of another Great Dane from Count Holnstein, Tyras.[7] Tyras died on 18 January 1889; Wilhelm II, German Emperor gave Bismarck Tyras II for his birthday the following April 1.[8] The dog died on 11 May 1896.[9]

Retrieved from "https://karniaruthenia.miraheze.org/w/index.php?title=Reichshund&oldid=7398"
Cookies help us deliver our services. By using our services, you agree to our use of cookies.