The 2017 Karno-Ruthenian coup d'état attempt, also known as the "January coup d'état attempt" was an unsuccessful coup d'etat in Letzembourg, against the government of Karnia-Ruthenia. The Republican Robert Bailey attempted to overthrow the government of Guilherme, Duke of Libertia and Archduke Anton of Karnia just five hours after acquiring Karno-Ruthenian citizenship. Bailey succeeded in contacting several ministers of State in an attempt to secure support to invalidate the mandate of the Prime Minister of Karnia and the Minister-President of Ruthenia. All the people contacted by Bailey to join his endeavor to create a "Merchant Republic" refused to follow his confusing ideas, and eventually the coup ended with his conviction and in a return to the status quo ante. There were no significant consequences.

On 15 January 2017, Christian, Grand Duke of Letzembourg and Emperor-King Oscar met to discuss plans for the expansion of the Empire. The idea was to attract micronations influenced by the Germanic culture to join the Empire. The first micronation chosen to implement this plan was the Duchy of Prussian Britannia, micronation already recognized by the Kingdom of Ruthenia since 19 December 2014. Inactive for more than a year, the Grand Duke got the contact of the then Duke Robert.

From that moment, Bailey began to demonstrate an aggressive attitude against the institutions of the Empire, accusing especially the legislative power of being "confused" and "inoperative", according to the following passage:

‘Looking at your Legislatures, it has come to my attention that there is an unorganised understanding of government and Legislative running. Like there are many misconceptions of it all. Like I ain’t slating your system, just some misunderstanding of who is what and what does what’. – Robert Bailey, at the time His Royal Highness, the Duke of Prussian Britannia, in the Imperial and Royal Council, 16 January 2017.

Believing that this was only the enthusiasm characteristic of the beginners, this first demonstration would be taken as a suggestion and a reason for enriching debate by the government for the rest of the night. However, in private conversation with His Imperial and Royal Majesty, he had once again demonstrated not to commune with the idea of joining the Empire in the way it is.

‘But I have ideas to create a merchant republic that is a nation under the real nations such as United Kingdom and His Majesty’s government and Christian with the United States and the president’. – Robert Bailey, at the time Duke of Prussian Britannia, in private conversation with His Imperial and Royal Majesty, the Emperor-King, 16 January 2017.

Throughout the 17 January, the accused tried to communicate with other members of the Government, seeking support to dissolve parliaments, as reported to the Imperial Cabinet by The Right Honorable Count of Fleurac and by many other Government officials, as can be seen in the following transcripts:

‘Well, I think soon His Royal Highness Christian (of Letzembourg) will off a motion of no confidence in the current prime minister and his government of the Empire of Karnia-Ruthenia. For that he hasn’t made a progress to our nation and the citizens of Karnia-Ruthenia throughout his time in office, wars and civil wars have been first and haven’t even conducted diplomatic negotiations. Two member states in the Imperial Council are from what I have gathered supporting Christian in that they have no confidence in the current prime minister’. – Robert Bailey, at the time His Royal Highness, the Duke of Prussian Britannia, in private conversation with His Serene Highness, the Ban of Horvatia, 17 January 2017.

The Imperial and Royal Secret Service, during routine activities of surveillance and defense, gained access to the content of various conversations that were presented to His Imperial and Royal Majesty, the Emperor-King, by the Head of the Secret Service and Minister of War, His Most Illustrious Highness, the Duke of Bradamante. Armed with this information, the Emperor-King questioned the Grand Duke of Letzembourg, who denounced the illegal activities of the former Duke of Prussian Britannia.

Thus, the His Imperial and Royal Majesty’s Own Office contacted the Minister of Justice, His Illustrious Highness, the Margrave of Hochbach and after a careful analysis of the events, it was found that the accused incurred in practice of some articles of the Penal Code of Ruthenia, Law valid throughout the territory of the Empire. The accused practiced the conduct of the article 9, acting against the national security by using secret content from the Imperial Council to promote his personal project of power; the article 10 in attempting to dissolve the parliament without just cause and thus to achieve, under false accusations, the subversion of the Monarchical State in favor of his "Merchant Republic"; the article 11, by forging before third parties His Imperial and Royal Majesty's supposed connivance to his plans and offending His figure in attempting to dissolve an organ legitimately constituted in His name and finally, the article 12, as he tried to coerce members of the government to promote his scheme, as well as directly attacking the Prime Minister of Karnia and the Minister-President of Ruthenia, falsely accusing them of fomenting conflict and failing in their commitments to the Empire. 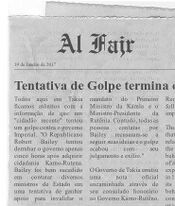 Considering the seriousness of the conduct committed and the penalties applied to such conducts, the Ministry of War and His Imperial and Royal Majesty's Own Office request to the Imperial Supreme Court to apply the maximum penalty, the expulsion of the accused citizen of the Empire.

The charges against Bailey were upheld, since the Constitutional rules for the dissolution of the parliament (article 28) and deposition of the cabinet (articles 120 and 124) in order to achieve goals unrelated to the system of government, would be against Bailey's personal purposes and the intentional undermine of the parliaments by slanderous accusations, transgressed the law. The penalty that was determined was revocation of citizenship and expulsion of the Empire.

Retrieved from "https://karniaruthenia.miraheze.org/w/index.php?title=2017_Karno-Ruthenian_coup_d%27état_attempt&oldid=6121"
Categories:
Cookies help us deliver our services. By using our services, you agree to our use of cookies.