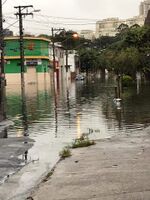 The Karno-Ruthenian city of Persenburg, the imperial capital, lies on the drainage area of the Tietê River, surrounded by Greater Persenburg, de facto Vila Anastácio neighborhood in São Paulo, Brazil. The river and the neighborhood played an important part in the development of the city, but during great rains they also meant danger. There were few floods, the worse of them in 2009, with minor damages, but the largest, which had the most damages was the one which caused major losses, invaded Hofbau Palace and keep most of the capital isolated happened in 10 February 2020.

Retrieved from "https://karniaruthenia.miraheze.org/w/index.php?title=2020_flood_in_Persenburg&oldid=7134"
Categories:
Cookies help us deliver our services. By using our services, you agree to our use of cookies.