Anton Wenzel, founder and former Kaiser of Karnia, was its first Archduke untis his abdication on 09 April 2019 and was also the President of the Imperial Council of Karnia-Ruthenia until 01 August 2017. He is also one of the signatoires of the Karno-Ruthenian Compromise of 2016 and is the first Regent of Tsechian Federation, another micronation founded by him on 25 December 2016.

He founded Karnia on 02 February 2016 at Prague, through a political act signed by him, who was elected as the first Kaiser; Calvin Gustav, the first and acting Minister-President and Louis Taünn, the President of the Reichsrat, the Imperial Council. Karnia was founded to preserve and celebrate the tradition of the Czech monarchy under the Habsburgs.

After some weeks, the project didn't achieved the expected result. Without a Constitution or a well estabilished system of government, the Karnian government understood they need help to estabilish themselves. Then, Kaiser Anton and the President of the Reichsratt, Louis Taünn found their help in the Ruthenian Government.

With many problems to establish a functioning government, and especially achieve recognition of other micronations, they realized a micronational project was much more difficult to drive than they would have imagined and accepted enthusiastically the help from Ruthenian government. With the break between the Kaiser and the Minister-President caused precisely by disagreements about the conduction of government, Karnia requested Ruthenian intervention. The cost of this intervention to save the newly created project was to deliver the Imperial Crown to the King of the Ruthenians.

In return, the project would be expanded and be at par with the Kingdom of Ruthenia. The result of this negotiation was the Karno-Ruthenian Compromise of 2016. Under the terms of the Compromise, Karnia and Ruthenia became the Karno-Ruthenian Empire, he abdicated of the throne in favor of Oscar I and became an Archduke, playing much influence over the development of a national culture inspired by the Habsburgs as much as political influence as the second President of the Imperial Council.

Although its history goes back to the history of the Karnian Empire itself, the Tsechian Federation itself was founded on 25 December 2016, when a small portion of the territory of Karnia ruled by Anton Wenzel on behalf of Oscar I and residence of Calvin Gustav were merged to create the federation. Calvin Gustav made opposition to the Karno-Ruthenian Compromise of 2016 and mitigated its activity in the Empire, without giving up micronationalism. With the permission of the Emperor-King, both created Tsechia, a member state of Karnia-Ruthenia, but without Oscar I as head of state.

On 09 April 2017, in his capacity as Regent of Tsechian Federation, Wenzel met Calvin Gustav, then Grand Duke of Svalonia, to discuss matters of national importance. The matters that would be discussed were the election of the King of Tsechia, establishment of administrative divisions, a regional constitution, the need to maintain a Tsechian armed forces rather than the Armed Forces of Karnia-Ruthenia, creation of a national order and possible list of personalities to be awarded, necessary regional laws to be submitted to the Emperor and effective separation of the powers of the State, with the transfer of the Judiciary Power of Tsechia to the Ministry of Justice and to the Court of Justice.

Calvin Gustav, in turn, suggested his own acclaim as King of Tsechia, the transformation of the federation into a unitary and centralized state, transform the Duchy of Taschen into a region administered directly by him and revoke the title granted to Oscar I, adopt an amended edition of the Czechoslovak Constitution of 1920 as national constitution, maintain the armed forces envisioned during the creation of the Federation and establish an absolute monarchy.

By the total disagreement between the parties and with support of Louis Taünn, both hurried to stand before the Emperor-King and expose Calvin's plans publicly and putting the division of government in focus. During the days that followed, the Emperor-King reviewed the Tsechian loyalist petition and tried to contact the Grand Duke of Slavonia to enter into an agreement, without success. Meanwhile in Tsechia, the friendly relationship between the parties deteriorated, causing Calvin Gustav to leave Tsechian territory on 16 April, where he would not return. On 21 April, the Emperor pronounced himself by Imperial Decree n. 085/2017, responding mainly in an affirmative way to the occurrence and putting an end to the revolution.

With little collateral damage and no change in the daily life of the Empire, Gustav's attempt to declare independence failed by sheer lack of adherence to his plans and unknown figure, but also demonstrated the confidence of the citizens in the imperial government, which, acting with leniency, was much less harsh than expected and, in part contradicting the claims of the Tsechian government, maintained its civil rights and citizenship. After the Antonian Revolution, Calvin Gustav was deposed, Oscar I assumed the throne in personal union with Karnia-Ruthenia and Anton Wenzel assumed the title of High Comissioner, an equivalent for regional Prime Minister. 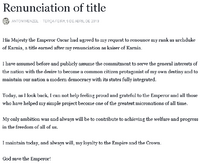 Renunciation of Title of Nobility, by Anton Wenzel. 09 April 2019.

A commoner and politician[edit | edit source]

After a long hiatus without any political office, Anton Wenzel resurrected the Constitutional Party at the end of March 2019. On 09 April 2019, he communicated to the Emperor-King his wish to abdicate from the title of Archduke guaranteed to him in the Karno-Ruthenian Compromise of 2016.

Retrieved from "https://karniaruthenia.miraheze.org/w/index.php?title=Anton_Wenzel&oldid=6267"
Categories:
Cookies help us deliver our services. By using our services, you agree to our use of cookies.