Axvalley, officially the Duchy of Axvalley, previously a principality, is a state of Karnia-Ruthenia claiming territory in Minas Gerais, Brazil. Established on 20 February 2013, the territory was a Crown Dependency of Austenasia until 13 July 2017, when Rubens Machado, its founder, requested the dissolution of their ties and became independent. After the signing of the Treaty of Kürzung and the approval by the Karno-Ruthenian Imperial Diet, Axvalley, now a duchy, became part of the Empire. The current ruling duke is Rubens, Duke of Kürzung, Axvalley's founder and since its foundation, its sovereign.

Founded as the Principality of Axvalley, it was a Austenasian Crown Dependency annexed by an Imperial Decree that same year. At that time as it still today, Axvalley is governed by its founder, Rubens Machado, who ruled as Governing Commissioner in the name of the Austenasian ruler.

Upon its annexation, Axvalley was Austenasia's largest and most populous territory, measuring nine hectares with a population of seven. Five of its residents were Roman Catholic, and two were Spiritualist. The main building used for the administration of the Crown Dependency was known as Francis Palace. 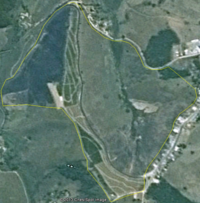 In 2013, the principality saw several developments. The most recognizable was the flag which Rubens Machado designed for Axvalley and was adopted on 4 September 2013 and used as the national flag until the ratification of the Treaty of Kürzung on 04 October 2017. On 12 September 2013, Axvalley changed its formal name to "Most Serene Principality of Axvalley" and on 21 September, Machado gave as an honorary hereditary status the title Lord Lieutenant to fellow resident Victor Verona, naming him the "Second Man of [the] Principality". [1]

With all the micronational activity exhausted at Axvalley, the new times called for new measures - at least, that was the vision of Emperor-King Oscar. A longtime friend of the Duke of Kürzung and having addressed the issue on several other occasions, he succeeded in mid-August, when the then Governor of Axvalley sent an act to the Austenasian parliament informing the desire for emancipation, which was accepted by the Austenasian government only on 06 August 2017, which mistakenly believed that the project would dissolve.

With the treaty of merging signed on 01 August 2017, the imperial government was informed and received the news with enthusiasm. Rubens Machado had already participated in the celebrations for the Empire's Day in his new capacity[2], but the treaty was delayed to be presented to the Imperial Diet in the face of worsening relations between Austenasia and members of the Congress of Colo, of which Karnia-Ruthenia was part. Although not directly involved and without any connection with Austenasia, the imperial government opted to wait for a moment of less tension.

The treaty was approved in the afternoon of 04 October 2017[3] and the fact was celebrated by the government, which saw its population and territory expand significantly. At the Imperial Court the sensation was of a more personal joy, since it now had a figure who had the Emperor's graces and held him in the highest esteem.

Retrieved from "https://karniaruthenia.miraheze.org/w/index.php?title=Axvalley&oldid=6483"
Categories:
Cookies help us deliver our services. By using our services, you agree to our use of cookies.