Badakistan or Badakhshan, officially the Imperial State of Badakhshan (Portuguese: Estado Imperial do Badaquistão), is the first known micronation originating from Brazil which adopted the Persian culture as the main feature of the micronational project. Badakhshan is a simulationist monarchy of Persian tradition, with Arabic and Ottoman influences. The governance model was the autocratic regime in which power is concentrated in the hands of His Imperial Majesty the Shah and a small elite formed by the princes who lead the various badakhshanis clans.

After a change of ruling house, a more democratic system of government was estabilished and the Emperor now is only the Head of State, the cerimonial leader of the micronation, while the Grand Vizier is the prime minister of Badakhshan, with absolute power and, in principle, dismissible only by the Emperor himself.

Despite its tradition goes back to the oriental despotism, Badakhshan adopts a format that approximates the Westernized tradition of States in which there is a legal basis for nature and the exercise of official authority. The Constitutional Charter of the State establishes the country's political organization, their Sovereignity and the powers and the rights and duties of the population as well.

On 03 March 2014, at 22h46 p.m., the State of Badakhshan has been created. The day marked the beginning of the first year of Badakhshani history, but in the words of the Shah Jaffar Shah, the Father of the Nation, this moment also represented a new moment to rescue micronationalism in the Lusophone Sector. The document that originated Badakhshan, the called "Proclamation of Khorough," is on display on the opening screen of the official website [1]. 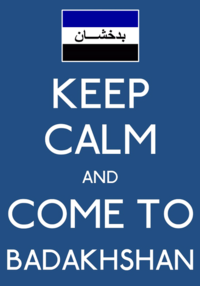 Hours after the foundation of the State, the Shah started the Government structuring process. Two government agencies were created (which in the Western tradition are homologous to State Ministries). Under decrees were created the International Relations Office and the Office of Information and Technology, naming up, respectively, Princess Baharak Shahinian and Prince Shahryar Mithra to occupy the board of the new institutions. 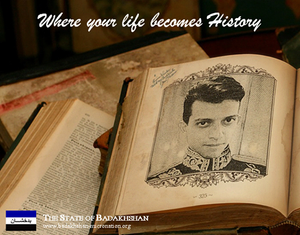 Five days later, the International Relations Office established formal diplomatic contact with five micronations from the Lusophone Sector, starting with great pomp the foreign affairs of Badakhshan. Recognition letters were sent from other simulationists projects like Germany, Italy, Netherlands, Portugal and the Holy Empire of Reunion, featuring what was treated as the "day of the nations" by the Government[2].

Meanwhile, the Shah published the decree creating the Angha Imperial Brigade and establishing the Military Statute[3]. The new force was the main military force of Badakhshan, responsible for implementing policies and operations for public and institutional security, monitoring borders and countering potential threats to state sovereignty.

On 20 May 2014, in a message published by the Imperial Postal Service, the Badakhshan was accepted as an Associate Member of the League of Micronations. Resolution No. 005-14[4] of the General Assembly formalized the entry of the micronation as the seventh state to join the organization.

However, a little over a year later, the government began to collapse. Loss of activity and of citizens, consecutive attempts to overthrow the Shah and the creation of micronations especially to rivaling Badakhshan weakened the Empire.

Followed to this, a series of diplomatic misunderstandings isolated Badakhshan to the rest of micronations of Lusophone Sector and from then on, even the imperial power came to be discussed and challenged. To contain the general dissatisfaction, the constitution was suspended and the government resigned, making Badakhshan an absolute autocracy. 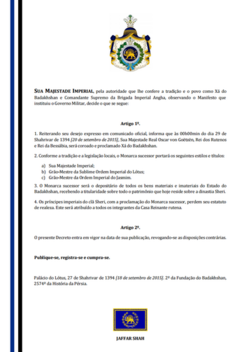 Renunciation to the Throne, by the Shah Jaffar Shah of Badakhshan, 18 September 2015.

The move however would not save the Empire. Therefore, the Imperial House started to search for possible successors. Featuring few allies and in the absence of elegible members in the Imperial House, the so-called Sheri Dynasty, the elected would be a foreign monarch. After days of negotiation, the King of Ruthenia, a personal friend of Jafar Shah and one of the few allies of Badakhshan, took the throne and the title of Emperor, abandoning the Persian trace, so far, a very characteristic feature of the Imperial House.

The first months of the pro-European dynasty were tumultuous. A massive stampede of citizens left the project. The government was totally weakened and a series of unequal treaties were signed by the previous government. The Lusophone sector, surprised by the rise of the House of Ruthenia, was divided between praise and criticism[5][6][7].

The Kingdom of Bessabia, then part of Ruthenia became part of micronational project of Badakhshan and subsequently absorbed[9]. The Constitution was restored to the people, the government has returned to active members and the clan system to the rise to political positions was banished, replaced by a more democratic system.

Despite Emperor Oscar's reign have been relatively successful and well accepted by most reputable micronations, it was a highly unpopular monarch. His subjects rejected it to see that it was a foreigner who did not identify with the micronation and who cared about the Anglophone sector, more than the Lusophone.

Between the end of November and the first week of December of 2015, the political situation was unsustainable. The return of former monarch Jaffar Sheri brought concerns and uncertainties. Willing to regain the throne, he sought the support of other micronations and garnered support among the aristocracy and the military.

Anticipating the coup through informations from the Ruthenian Secret Service, the Emperor decreed the dissolution of the Majlis, the parliament and took upon himself the command of the armed forces. Provided with dictatorial powers, contacted the Stadhouder of the United Provinces of Mauricia to hand over sovereignty over the territory, ending the Badakhshan as an independent and sovereign micronation.

A union treaty was signed in the last hours of the 08 December 2015. The Badakhshan became a province of a traditional Brazilian micronation and the then Emperor, deprived of his power, assumed the title of "Hereditary Lord of Badakistan Lands".

Badakhshan is defined as a historical-simulation model, to restore a government that was established over a reasonable stretch of the famous Silk Road, an area now shared by Afghanistan (west/southwest) and the Tajikistan (north/northeast). At different times in history, Badakhshanis were conquered by the great powers of Central Asia, especially Afghans, Mongols, Chinese and Russians. However, were the Persians (originating in Iran) that most influenced the linguistic construction of the population, borrowing elements that realize the Afghan cultures and Tajik found in the historical region of Badakhshan.

In terms of exercise of power, Badakhshan was controlled by various despotic monarchies in which the land constituted in property of an absolute monarch who imposed strict control over the population. After teh ascension of the House of Ruthenia, an Westernized tradition of democratic elections was imposed by the Second Constitution. The Emperor became solely the Head of State with no real power in internal affairs and the Grand Vizier, the prime minister of the Empire, act as the Head of Government.

The Badakhshani foreign policy is conducted by the International Relations Office. This government ministry which in most micronations is known just as the "Foreign Ministry", carries out diplomatic dialogue of Badakhshan with other micronational projects in Lusophone and English Sector of micronationalism.

Created by decree of His Majesty, the Angha Imperial Brigade is the military body of Badakhshan, established in order to protect the project and the imperial family, preserve internal order and monitor the borders. The Military Statute is the regulation of the Brigade. The statute established their patents, recruitment and promotion process. The command belongs to a superior officer appointed by His Majesty for the management and control of military operations in the country.

Retrieved from "https://karniaruthenia.miraheze.org/w/index.php?title=Badakistan&oldid=4382"
Categories:
Cookies help us deliver our services. By using our services, you agree to our use of cookies.