Cardonia, officially the Kingdom of Cardonia, is a constitutional monarchy located in Asia. Founded by Carl of Cardonia on 05 February 2015. It is located withing the boundaries of Ishigakiyama Castle Park. On 31 January 2019, was annexed by Karnia-Ruthenia due the Treaty of Libenstein, that also merged Hakodate to its territory.

Caledonia was established in 05 February 2015, the same day they issued their Declaration of Independence and when its founder, Carl of Cardonia, ascended to the throne. Four days later, Karl, Duke of Froignstein, was appointed Prime Minister of Cardonia, becoming acting Minister of Interior, of Foreign Affairs, of Finances and of the Royal Army. Friedrich, Count Valostowa, became the Chief of Staff of the Royal Army.

On 05 July 2015, Franz, Baron Kariz became the second Prime Minister, replacing Karl, Duke of Froignstein. From this moment, Cardonia was involved in disputes against the Principality of Woolberstein in the "Wooberstein War", that eventually merged to Cardonia on 05 November 2015 in a conclusion of conflict recognized by the former ruler of Woolberstein, Prince Frederick, only on 08 January 2016. Nine days later, was concluded the Treaty of Distinnin, in which Prince Frederick abdicated as sovereign of Woolberstein, but being named as Mayor of Abel Stein, Lieutenant-General of the Cardonian Army and Inspector of Woolberstein Frontier, what was accepted.

An uprising led by Prince Guillaume broke out on 08 May 2016 and lasted until 12 September of that year, in the so-called Caledonian Civil War. Despite the proposal of arbitration by the Grand Duchy of Destato, to occur on 25 September 2016, ten days before, Prince Alexander rebelled against royal authority and on 21 September, Carl of Cardonia abdicated. Four days later, on 25 September, Alexander was crowned the second King of Cardonia and reigned until 31 October 2018. Having recognized Carl of Cardonia his successor, he became titular King of Cardonia from that date on.

Carl of Cardonia's claim was recognized by Karnia-Ruthenia in the Treaty of Libenstein, that also merged Cardonia to Hakodate and annexed the kingdom to the Empire. On 01 January 2020, Carl was officially removed from his role as king, being replaced by Oscar I. 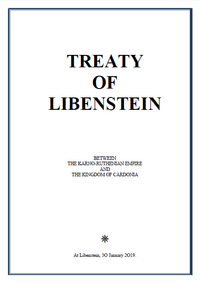 The Government, until the beggining of 2019, was composed by the offices of Prime Minister, Deputy Prime Minister, Minister of the Royal Army, Minister of Foreign Affairs, Minister of Interior and Minister of Finances. The Royal Parliament, created with the same day the kingdom was founded, had 35 seats (never fullfiled), reserved for aristocracy, when a Baron, a Count and a Duke had the right for a term of four years and members of the Royal House and a person designated by the Monarch by Royal Edict would have a term for life. Vacant from its establishment until the October 2016, the Parliament had two Chairman: Franz von Prem (01 October 2016 - 01 February 2017) and Christian Frederick, Duke of Richston (01 February 2017 - 01 April 2017). The Privy Council, with 23 seats, was an advisory body to the King. All of this institutions were desestablished by the annexation to Karnia-Ruthenia.

The ruling dynasty of Cardonia is the House of Werzberg. The inaugural monarch, Carl, is member of the house, while his successor and former friend, Prince Alexander, claimed to be member of the royal house. The house also have as its member Carl's younger brother, Prince Clemens, Duke of Peruna. With the constitutional right to appoint the Prime Minister and form a cabinet, grant titles of nobility and decorations, to grant amnesty, to conclude and revoke treaties, to declare war and some others, the King of Cardonia claim the full title:

The other members of the royal family are simply known as "Prince or Princess of Cardonia". The title of Grand Duke of Leuvenberg and of Strena, former Cardonian royal titles, were ceded to Emperor-King of Karnia-Ruthenia by force of the Treaty of Libenstein; in the same opportunity, he was made "Protector of Cardonia".

Located withing the boundaries of Ishigakiyama Castle Park, its capital is the city of Libenstein, a city that carried the motto "We will lead the king". Other cities are Belzena and Castellia. An exclave is the Protectorate of Alexanderia. After the Treaty of Libenstein, Hakodate became a territory of Cardonia.

Despite being located in Asia, Cardonia follows most of Western costumes and traditions. Not only by the composition of its government, army and aristocracy, but also by their national holidays: 01 January 1, Western New Year's Day; 05 February, Foundation Day; 07 May, King's Coronation Day and 24 and 25 December, Christmas holiday.

The history of the Royal Army army begins when it was established, on 15 February 2016, claiming an active personnel of 16 soldiers. Their ranks was of Supreme Commander and Generalissimo, reserved for the monarch and used only during the first reign of Carl of Cardonia and the reign of Alexander of Cardonia; Marshal, rank earned only by the Friedrich, Count Valostowa; General; Lieutenant General, earned only by Prince Frederick of Woolberstein; Major General; Colonel; Lieutenant; Major; Captain and Soldier. All of this ranks were desestablished by the annexation to Karnia-Ruthenia and the Royal Amry became the Twelfth Army.

Retrieved from "https://karniaruthenia.miraheze.org/w/index.php?title=Cardonia&oldid=6743"
Category:
Cookies help us deliver our services. By using our services, you agree to our use of cookies.