The Conference of Santiago (Portuguese language: Conferência de Santiago), also abbreviated as CS, is a intermicronational organisation with the aim to promote derivatism among Brazilian micronacionalists and to establish wide contact with another micronational sectors.

The CS was founded in April 2020 around the then newly-established Brazilian sector, after several debates over the creation of a Brazilian or lusophone derivatist sector, therefore opposing the hegemonic simulationist and modelist-controlled Lusophone sector.[1] While the CS was founded by the King Thomas I of Quinta Velha, via the Treaty of Santiago,[2] it has as it's grounds the Treaty of Persenburg,[3] which formally established the Brazilian sector, and follow the definitions of the Protocol of Goetha,[4] both documments authored by the Emperor-King Oscar I of Karnia-Ruthenia, signed and ratified by all of the CS' member-states.

A debate arouse over this matter between derivatist micronationalist for several months until 12 March 2020, when Oscar I, Emperor-King of Karnia-Ruthenia drafted the Treaty of Persenburg, a documment that formally established a Brazilian derivatist micronational sector - the Brazilian sector - and whose signatories compromised to not anymore diplomatically recognize simulationist and historical-modelist micronations, although regarding their importance to the Brazilian and Lusophone scenes. The creation of a derivatist sector was a shock to the simulationist-led Lusophone sector, which started several diplomatical and personal attacks to the Treaty of Persenburg's signatories states and it's micronationalists. Shortly after, the Protocol of Goetha was also published as a guideline on micronational right and definition.

Sooner after sign the Treaty of Persenburg, the Kingdom of Manso sought to alter it's content, promoting that the treaty should not ordain on a derivatist micronation's relation with micronations of other kind. Queen Marina I then presented her version of the text to appreciation by the treaty's signatories, but as they were all in consent that the text should not be altered, her presentation was promptly ignored and eventually dismissed. This led the Manso to move away from the treaty, removing itself in 12 April 2020. The Empire of Deltaria also removed itself from the treaty for other personal reasons. 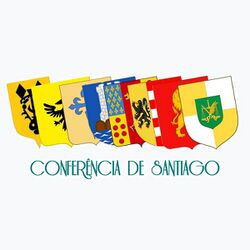 With the attacks against the Treaty of Persenburg signatories growing violently and the Manso approach towards the II Microcon, a reactionary conference organized by the simulationist and historical-modelist nations of the Lusophone sector, headed by the micronational "German Empire (Portuguese: Império Alemão)", the King Thomas I of Quinta Velha designed an Intermicronational organization made up of derivatists to act cohesively on the matter, so on 7 April he drafted the Treaty of Santiago and presented it to all nations in accordance to the Treaty of Persenburg's original terms - this is, all nations but the Manso, Deltaria, Montevert and Armatia (the two latter due to withdrawal all their micronational actions).

As soon as the Ebenthal became the last founding-signatory to ratify the treaty, on 12 April it's content was published and the next day the first Conference of Santiago summit was held in Persenburg. With the Conference of Santiago publicly created, the Mansean goverment, siding with the Microcon powers, also started to attack the Conference members, arguing that the Treaty of Santiago was developed in the darkness and that the Manso wasn't invited for a treaty they "would accept". Aiming to resolve the disputes, the High King Arthur II of Ebenthal, the Regent Cesar of the Lateran States and the Princess Maria I of Sildavia offered to talk with the Mansean monarch and representants on the I Santiago-Mansean Summit. Unbeknown to the Conference of Santiago representants, the self-proclaimed King of Bauru and St. Vincent, a simulationist micronation, was also present at the summit. As the talks were going with the Manso accusing the Conference member of betrayal, the King of Bauru, exhalted, cursed the High King of Ebenthal, who immediatly left the summit. The event came to be known as the Santiago-Mansean Conflict.

Despite the diplomatical crisis generated over the creation of the Conference, it's members continued to act in accordance and sought to expand the Conferece's relations, membership and influence. Over the next days, Quinta Velha and Karnia-Ruthenia established relations with the Republic of Rino Island, the most successful Chilean micronation, which expressed desire to join the Conference. The Conference as a whole started diplomatic talks with the Grand Republic of Delvera, which also demonstrated interest on the unique initiative of a derivatist sector and cohese organization. In 16 April 2020 the United Provinces of Mauricia also started diplomatic conversations with the Conference members, resulting in the confection of a diplomatical treaty of recognition between this micronation and all the Conference members on 20 April and the discussion of a special membership status to Mauricia on the Conference.

In May 2020 the Republic of Rino Island aceeded to the Treaty of Santiago and officialy joined the Conference as a special international member.

The Conferece of Santiago works as a direct democracy, this means, there is no hierachical chain of command. The Heads of State of all member-states revolve in a plenary that can be summoned at any time where, as equal parts, they can propose and vote matters and courses of action. The approval of a proposal is defined by a majority vote.

Currently there is a debate over the participation of non-lusophone states at the Conference and the possible creation of special membership status whereas a micronation can join the Conference on it's own terms but with no right to vote.

According to the Treaty of Santiago, the namesake Conference aims to "promote the micronationalism derivatist among practitioners of micronationalism wether they be Brazilians or speakers of the Portuguese language [and] [...] support new derivatist projects, regardless of political system, religion or government" observing the definition of the Goetha Protocol.

Since it's foundation, the Conference has been criticized by the simulationist and historical-modelist micronational projects of the Lusophone sector as a proponent of division, since there was no clearly open issue on the derivatism x simulationism/historical-modelism. The King of Bauru and St. Vincent argued that the Conference intend to reduce non-derivatist projects to a "second class" of micronations, while the Queen of Manso argued that the derivatist exclusivity would be harmful to the micronations' foreign relations.

Other than critiques, attacks are also parting from the micronational "German Empire", the main historical-modelist actor in the Lusophone sector, who, motivated by the fear to lost hegemony among lusophone micronations, hans't argued nothing, but published offenses on it's journal.

Retrieved from "https://karniaruthenia.miraheze.org/w/index.php?title=Conference_of_Santiago&oldid=7399"
Category:
Cookies help us deliver our services. By using our services, you agree to our use of cookies.