Coronation of the Karno-Ruthenian monarch 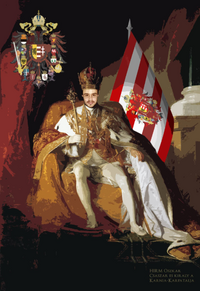 Oscar I imagined in coronation robes, by André Vieira. 2016.

The Coronation of the Karno-Ruthenian monarch (in Portuguese: coroação do monarca Karno-Ruteno) is a ceremony in which the Emperor-King and Empress-Queen (if there is at time) is formally crowned, annoited and invested with regalia. It corresponded to the coronation ceremonies that occurred in other European monarchies, especially France, Germany and especially Hungary and Bohemia.

Like in France and England, the sovereign's reign began immediately upon the death of his predecessor, being the coronation optional, as a coronation was not viewed as being necessary to legitimize their rule in that country.

The location of coronations is Cathedral of Saint Stephen King of Hungary, in Persenburg. The person performing the coronation of the Emperor-King is the Archbishop of Persenburg. Other clergy and members of the nobility also have roles; most participants in the ceremony are required to wear ceremonial uniforms or robes and coronets. Many other government officials and guests attend, including representatives of other countries.

Since the foundation of Ruthenia, in 2014, a cerimony of coronation was imagined, but never carried out. After the Karno-Ruthenian Compromise of 2016, the subject was discussed again. Once more, there were no cerimony of coronation, despite some works to determine the event in case of happen in future. This way, a coronation ceremony was never established; the heir to the throne became Emperor-King the moment his predecessor dies or abdicate.

Considering the pursuited style inspired by the Austro-Hungarian Imperial Court, the function of the monarch is styled like a secular papacy. Therefore, it is the overall goal to demonstrate the all-highest majesty and dignity of the monarch to his subjects and to other monarchs and countries. His and his entourage's life must be and in fact, it is governed by very strict rules all the time. The conception of the cerimony is bonded to this vision.

At the earliest possible opportunity after the death or abdication of the monarch, the new Emperor-King should gather a joint session of the two houses of the Imperial Diet. The monarch's Grand Masters of the Court announces the arrival of the new monarch, a moment that marks the monarch's formal installation, which requires only a solemn oath to "abide by the Constitution and the laws of the Karno-Ruthenian people, maintain the Empire’s independence and preserve its territory" before the members of the two chambers of parliament. The constitutional oath is almost the same made by Oscar I when promulgating the Imperial Constitution of 2017. After the oath, the Imperial Chancellor recognize the new sovereign. Following this, the names of the members of the Imperial Diet are called out, who then swear or affirm his allegiance to the monarch. After every member has sworn, the Imperial Chancellor declares the ceremony to have been completed. This is followed by the Hofpfalzgraf exclaiming that the monarch has been inaugurated and the Imperial Chancellor crying "Long live the Emperor-King!" to the response of three hurrahs from the public present. The Hofpfalzgraf proceed outside the Imperial Diet to announce to the public outside that the monarch has been inaugurated and cry "Long live the Emperor-King!" After the oath ceremony, the monarch and his retinue then exit the Imperial Diet to walk to the Cathedral of Saint Stephen before an official reception at the Hofbau Palace.

At the Cathedral of Saint Stephen King of Hungary, before the entrance of the sovereign, the Graduale from the Hungarian Coronation Mass, by Franz Liszt is performed during the procession of the clergy and other dignitaries. Leaving the Imperial Diet, the new sovereign proceeded slowly toward the cathedral by foot, followed by his or her consort at his or her side, the other members of the ruling dynasty, the ladies-in-waiting, the members of the Imperial Diet and the officials of the Imperial Government. 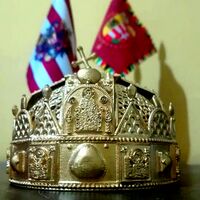 The replica of the Holy Crown of Hungary, Imperial Treasury, 2019.

The Emperor-King and his wife were met at the cathedral door by the Archbishop of Persenburg. He offers the Cross to the monarchs for kissing, and then sprinkled them with holy water. Once they had entered the cathedral, they venerated the image of Saint Stephen, King of Hungary, then took their places near the altar, where they will stand.

The Archbishop then said the prayer:

"Almighty and everlasting God, Creator of all things, Commander of angels, King of kings and Lord of lords, who caused your faithful servant Abraham to triumph over his enemies, gave many victories to Moses and Joshua, the leaders of your people, exalted your humble servant David to the eminence of kingship, enriched Solomon with the ineffable gifts of wisdom and peace. Hear our humble prayers and multiply your blessings upon your servant, whom in prayerful devotion we consecrate our Emperor-King; that he, being strengthened with the faith of Abraham, endowed with the meekness of Moses, armed with the courage of Joshua, exalted with the humility of David and distinguished with the wisdom of Solomon, may please you in all things and always walk without offense in the way of justice. May he nourish and teach, defend and instruct your Church and people and as a powerful sovereign administer a vigorous regimen against all visible and invisible powers and, with your aid, restore their souls to the concord of true faith and peace; that, supported by the ready obedience and glorified by the due love of these, his people, he may by your mercy ascend to the position of his forefathers and, defended by the helmet of your protection, covered with your invincible shield and completely clothed with heavenly armour, he may in total victoriously triumph and by his power intimidate the unfaithful and bring peace to those who fight for you, through our Lord, who by the vigor of his Cross has destroyed Hell, overcame the Devil, ascended into heaven, in whom subsists all power, kingship and victory, who is the glory of the humble and the life and salvation of his people, he who lives and reigns with you and the Holy Spirit forever and ever. Amen."

God, the Son of God, Our Lord Jesus Christ, who by the Father was anointed with the oil of gladness above his fellows may He himself by this present infusion of holy anointing pour upon your head the blessing of the Spirit Paraclete to penetrate into the innermost of your heart so that you receive by this visible and material oil invisible gifts and finally having performed the just government of this temporal Empire, you may merit to reign eternally with Him who alone is the sinless King of Kings, who lives and is glorified with the God the Father in the unity of God the Holy Spirit, for ever and ever. Amen

Then the Mass for the day was begun with the Archbishop saying after the Collect for the day, the additional prayer, "God who reigns over all," etc. After the Alleluia the Emperor-King is invested with the regalia. The sovereign is first invested and girded with a sword with the formula:

Accept this sword through the hands of bishops, who unworthy, yet consecrated by the authority of the holy apostles, impart it to you by divine ordinance for the defence of the faith of the holy Church and remember the words of the psalmist, who prophesied, saying, "Gird yourself with your sword upon your thigh, O most mighty one, that by it you may exercise equity, powerfully destroying the growth of iniquity and protect the holy Church of God and his faithful people. Pursue false Christians, no less than the unfaithful, help and defend widows and orphans, restore those things which have fallen into decay and maintain those things thus restored, avenge injustice and confirm good dispositions, that doing this, you may be glorious in the triumph of justice and may reign forever with the Savior of the world, whose image you bear, who with the Father and the Holy Spirit, lives and reigns, forever and ever. Amen.

The sovereign then brandish the sword three times and is then crowned with the Crown as the Archbishop proclaim:

God crown you with a crown of glory and righteousness, that having a right faith and manifold fruit of good works, you may obtain the crown of an everlasting kingdom by the gift of him whose kingdom endureth for ever." To this the guests, with heads bowed, say Amen.

Next the king was given the Scepter with the formula:

Accept the Rod of virtue and equity. Learn to respect the pious and to intimidate the proud; guide the straying; lend a hand to the fallen; repress the proud and raise the humble, that our Lord Jesus Christ may open to you the door, he who said of himself, "I am the Door, whoever enters by me, bu me shall be saved," and let he who is the Key of David and the Scepter of the House of Israel, be your helper, he who opens and no one may shut, who shuts and no one may open; who brings the captive out of prison, where he sits in darkness and the shadow of death, that in all things you may imitate him, of whom the Prophet David said, "Your seat, O God, endures forever; a rod of righteousness is the rod of your kingdom. You justice and hate iniquity, therefore, God, your God, has anointed you with the oil of gladness above your fellows," Jesus Christ, our Lord.

Then the Orb was placed into his left hand without any formula and the king was enthroned with the formula:

Be steadfast and hold fast to that place of which you have become heir by succession from your forefathers, now delegated to you by the authority of Almighty God and transmitted to you by us and all the bishops and servants of God and when you see the clergy draw near to the holy altar, remember to give them appropriate honor that the Mediator between God and humanity may confirm you in this imperial position as the mediator between clergy and laity and that you may be able to reign with Jesus Christ, our Lord, the King of kings and Lord of lords, who with the Father and the Holy Spirit lives and reigns forever and ever. Amen.

The Te deum is then sung followed by the responsory:

The Archbishop then said either the prayer, "God who made Moses victorious". The people then greeted the sovereign with the words, "Life, health, happiness, victory!" after which the Mass proceeded to its conclusion.

The creation of the most apotheotic part is when the sovereign in full regalia left the cathedral and point to the all four corners with the sword and swear to protect the Empire and all its subjects. After that, the nobles and the subjects would hail their new sovereigns with cries of 'hurrah' three times and paying homage.

After the ceremony, the royal couple would proceed with great fanfare to the Hofbau Palace to receive the homage.

During the talks about a coronation, it was studied the proposal to be presented to the dignataries present to the cerimony commemoration medals, showing the profile of the new monarch, the name of the monarch and the date of the inauguration. The ribbon's colour is in red and white, the national colours.

Retrieved from "https://karniaruthenia.miraheze.org/w/index.php?title=Coronation_of_the_Karno-Ruthenian_monarch&oldid=8083"
Cookies help us deliver our services. By using our services, you agree to our use of cookies.