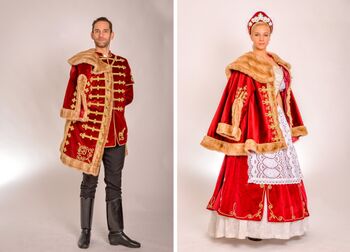 Dísz, or in English "Ornamental", is the court dress of Karnia-Ruthenia, being heavily inspired, in name and style, but the díszmagyar. The court dress – in terms of its classical meaning, like in the case of the Russian and Greek court gowns - emerged from the traditonal Hungarian costumes of the 16-17th centuries as the official wear in the Imperial and Royal Court, in personal meetings of the Imperial Diet, at coronations and balls, on the occasion of the inauguration of a new government, on national holidays and so on. But it is important to mention that the Dísz was the attire of the nobility and the imperial family.

The dísz for both men and women can be made of various materials, such as velvet, silk, brocade and other exotic cloth. The colour was not prescribed, though the different parts of the attire should harmonise in colour. The most common colors are red and black, being possible any vivid colours.

The dísz for men included a short fur coat, the mente, a dolman, social pants and a same colour briefs. A full dísz was worn with high fur cap, the süveg, with social shoes and necktie. Though it was not mandatory, if using the mente, it must be worn only on one of the shoulders.

The female version contained a skirt, an apron, a shirt and a shoulder. There were no ’shoes code’ or ’jewelry code’, however, at occasions like coronation the best jewelries and a veil were required to wear. A mente thrown over one of the shoulders similar to the men’s wear also became the part of the female gown. As for the headdress, the Hungarian-style headdress, the párta, or the bonnet were in use, and at special occasions women wore tiara.

This costume, idealized as a highly formal national expression and in view of its high cost and difficult confection, is not required, serving almost exclusively as an aesthetic demonstration by the peculiar culture of the Empire.

Retrieved from "https://karniaruthenia.miraheze.org/w/index.php?title=Dísz&oldid=6750"
Cookies help us deliver our services. By using our services, you agree to our use of cookies.