Daugavia, officially the Duchy of Daugavia, previously an independent dukedom, was a state of Karnia-Ruthenia claiming territory in São Paulo, Brazil. Established on 30 November 2018 by dissidents emigrating from the Kingdom of Deltaria. After the signing of the Treaty of Ephigeniastadt and the approval by the Karno-Ruthenian Imperial Diet, Daugavia became part of the Empire. 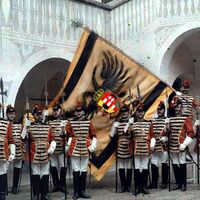 Created on 30 November 2018, the Duchy of Daugavia is a small monarchy surrounded by the city of São Paulo, a few kilometers away from the capital and heart of the Empire, Persenburg. Founded by Deltarian immigrants, it was headed by Duke Ulli of Daugavia, the reigning duke and until then, one of the youngest and most promising figures in Lusophone micronationalism.

Leaving his home micronation behind with open doors, he ventured into the English-speaking sector of micronationalism and enjoyed sovereignty for a few hours. The founding of the duchy was aided by the Emperor-King of Karnia-Ruthenia, but conditioned to its future union with the Empire, becoming the fifteenth entity of the Empire, bringing a population of four people, being three women and therefore, composing the territory of the empire with greater female population until the present through the signinature of the Treaty of Ephigeniastadt[1].

On 30 December 2020, the Imperial Council decided about territorial changes and the Duchy of Daugavia was dissolved on 31 December 2020, at 23:59 p.m.

Retrieved from "https://karniaruthenia.miraheze.org/w/index.php?title=Daugavia&oldid=8279"
Categories:
Cookies help us deliver our services. By using our services, you agree to our use of cookies.