Departments of the Ruthenian Government 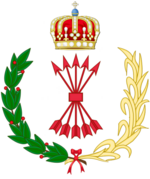 Coat of Arms of the Ruthenian Government.

A Ministery department is led politically by a Government minister. For most departments, the Government minister in question is known as a minister of state and he is also a member of the Council of State. He or she is generally supported by a team of junior secretaries. The administrative management of the department is led by a senior civil servant known as a secretary. A non-ministerial department generally cover matters for which direct political oversight is judged unnecessary or inappropriate. They are headed by someone appointed by the Minister indicated by His Majesty to regulate and/or inspect this department.

Retrieved from "https://karniaruthenia.miraheze.org/w/index.php?title=Departments_of_the_Ruthenian_Government&oldid=1512"
Cookies help us deliver our services. By using our services, you agree to our use of cookies.