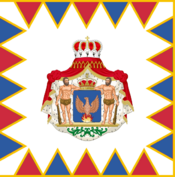 First colour of the VIII Army.

The history behind the foundation of the Eighth Army begins with the joining of the Duchy of Argadia to the Karno-Ruthenian Empire. The roots of the Argadian land force was the Armed Forces of Imvrassia, established around 2011. After the joining to the Empire, the Argadian branch of military was created in July 2016 to serve as a defensive force of the Empire in the event of conflict.

Retrieved from "https://karniaruthenia.miraheze.org/w/index.php?title=Eighth_Army&oldid=3696"
Categories:
Cookies help us deliver our services. By using our services, you agree to our use of cookies.