The Evidenzbüro is the government agency founded on 18 April 2021 as a reform of the previous Imperial and Royal Secret Service, that operated under the Ministry of War of Karnia-Ruthenia, succeeding in responsability for the collection, analysis, exploitation of information and intelligence in support of law enforcement, national security, military and foreign policy objectives of the Karno-Ruthenian Empire. After the Jutlandian War, the agency created after the signature of the Karno-Ruthenian Compromise of 2016, that replaced the Secret Service of the Kingdom of Ruthenia was reformed into the Evidenzbüro. 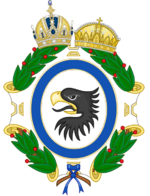 Coat of Arms of the IRSS.

Founded in 2021 in the aftermath of the Jutlandian War as a permanent military intelligence service, the Evidenzbureau already was active since 2014 as the Ruthenian Secret Service[1], and was reformed after the Karno-Ruthenian Compromise of 2016, on March 2016.

After the Jutlandian War, s short-lived conflict in online environment, was clear that more investment in counterintelligence and security was pivotal for the future endeavours of the Empire, with a clear preference for cybersecurity, that received an exponential increase of funds.

Towards the beggining of the 2020's, tensions with other micronations, especially through social media, led to an increase of activities of intelligence services. In Karnia-Ruthenia, the main objective was to identify agressors and issue fast answers while protect the virtual assets of the Empire, acting in accord to the dispositions of the Convention of Fruchemburg. The bureau collect intelligence of strategic relevance from various sources into daily reports to the Head of Staff and reports to the Emperor. The core bureau at the time of its creation consist of approximately 5 officers.

Retrieved from "https://karniaruthenia.miraheze.org/w/index.php?title=Evidenzbüro&oldid=8464"
Category:
Cookies help us deliver our services. By using our services, you agree to our use of cookies.