Savage Islands, officially the Grand Duchy of the Savage Islands (Portuguese: Grão-Ducado das Ilhas Selvagens) was a small archipelago which claimed to be a sovereign state but was more commonly referred to as a micronation by external observers. It was located in the North Atlantic, nearly midway between Madeira and the Canary Islands.

The archipelago was constituted by two major islands and several islets of various sizes, compromising two areas: one on Great-Savage Island and the other on Lesser-Savage Island. The archipelago was administered de facto by the Portuguese municipality of Funchal but since it's formation as grand-duchy, the archipelago was administrated de jure by D.Guilherme da Lomellina e Berenguer since 23 February 2015 under the Kingdom of Ruthenia administrated by Oscar, King of Ruthenia, having territorial disputes with the Portuguese Republic and APC (Canary Islands).

The name "Selvagem" is the portuguese form of "Savage" given explanation that the islands were and are partially uninhabited by humans. They were baptized as Savage Islands in 1438 by Diogo Gomes de Sintra, a portuguese discoverer and the first de jure monarch of the Kingdom of the Savage Islands.

On 23 February 2015, the monarch D. Francesco Moniz II gave the rights and sovereignty of the islands to his cousin D. Guilherme da Lomellina e Berenguer, the then Duke of the Duchy of Libertia and Chancellor of Ruthenia. The Kingdom was transformed into the Grand-Duchy of the Savage Islands and annexed to the Kingdom of Ruthenia since D. Guilherme paid loyalty to the Ruthenian Monarchy.

On 19 June 2015, D. Guilherme da Lomellina e Berenguer resigned to his title of Grand Duke, inherited by his cousin, King Francisco II due to the fact that the Portuguese Republic and the APC (People's Alternative for the Canary Islands) are both involved in a territorial dispute that could create diplomatic, political and physical problems to the Kingdom of Ruthenia and the Duchy of Libertia. This fact ended the occupation which lasted four months and 17 days.

The throne was often hereditary but other means of transmission of power are attested from owner to owner. Every island of the archipelago is a Duchy and every islet is simply a County, each of them having a sub-head of state of respectively, a Duke and a Count wich obeyed to the Grand-Duke of the Islands.

Each city had a Marquess wich controled the city and could take decisions about the format and geographical change with the consent of the Duke (island) or respective Count (islet). The most powerfull political domain was the Grand Duchy (or Grand Dukedom) following by the Dukedoom where the sons and the sibblings of the monarch are inserted, mainly these two political domains were the highest members of the Royal Family of the Savage Islands.

The savage islands culture was largely influenced by the Portuguese culture, adopting most of the portuguese traditions and customs. The official language was Portuguese because the islands were in custody of the Portuguese Republic for 43 years and the previous owners were also portuguese citizens and that influenced in the culture of the Savage Islands.

The two flags used in the Kingdom of the Savage Islands.

The coat of arms or crest, was created in the same day as the flag (30 August 2014). It's constituted of two blue/gold supportive group of leaves, a gold helmet with the royal crown of the Savage Islands, a blue mantle with the 5 gold stars and the white map of the Great-Savage Island in the shield and a motto field with the official motto Parva sunt, sed potentia..

Annual temperatures hover around 17–19 °C, generally exceeding those in Madeira (defined as a subtropical maritime climate), while sea temperatures remain comfortable all year round. Due to its warm arid climate and geomorphological characteristics, the Savage Islands are exposed to strong coastal winds that reduce precipitation to less than 500 mm annually. These indicators, define the outcroppings as deserts, climatically. The islands' low altitudes do not allow significant precipitation, and what little freshwater flows over the islands/islets are filtered away through the porous sediments. 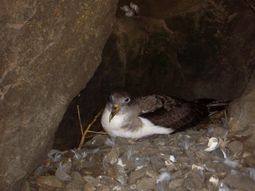 Cory's Shearwater roosting in her nest within the crags on the island of Selvagem Pequena.

The scientific and natural interest of this tiny group of islands lies in its marine biodiversity, its unique flora and many avian species that breed annually on its rock cliffs or use them on their stopover on normal migratory patterns. About 3% of the 9000 species of birds are marine species, the remaining are migratory species. The abundance of birds on the islands, at one time, made the islands an attractive hunting area for peoples of the region. At the end of the 19th century the German naturalist Ernst Schmitz noted that 20–22,000 Cory's Shearwaters were hunted in September or October in the islands;[9] the hunts continued until 1967. Madeiran expeditions to the islands were responsible for the killing of juvenile birds, for food, while their down was used to stuff pillows and comforters. Presently the islands are home or stopover for: Cory's Shearwaters (approximately 14,000), White-faced Storm-petrel(12,000), Bulwer's Petrel (500), North Atlantic Little Shearwater (500), Madeiran Storm-petrel (1000), Yellow-legged Gull, the Roseate Tern and Berthelot's Pipit; which are subjects of annual scientific expeditions.

Jacques-Yves Cousteau once found what he believed was "the cleanest waters in the world" around this minor archipelago; there is an abundance of marine activity, many endemic to the environment, including the Barred hogfish, puffer fish Tetraodontidae, the Sea Spider and many species of Sea urchin.

The Savage Islands are part of the Macaronesia, the name used to designate the island groups of the North Atlantic Ocean, near Europe and off the coast of Morocco in North Africa. The archipelago lies about 280 km (174 mi) from Madeira, and 165 km (103 mi) from the Canary Islands. The total land area of the Savage Islands is 2.73 km2 (1.05 sq mi). With little fresh water and surrounded by dangerous reefs (which makes limited access difficult), the archipelago consists of two major islands and several islets, in two groups about 15 km (9 mi) apart, designated:

The islands physical characteristics are the consequences of mountain-forming and volcanic forces that occurred between 60 and 70 million years ago, typical of many of the islands of Macaronesia. The islands were created during the late Miocene period, from a large submarine volcano and shaped by erosion and marine sedimentation. The larger islands and islet (Grande, Pequena and Fora, respectively) are the remnants of the peaks of these submarine mounts, and although located north of the Canaries, they were never connected to the African continent.

Retrieved from "https://karniaruthenia.miraheze.org/w/index.php?title=Savage_Islands&oldid=4380"
Categories:
Cookies help us deliver our services. By using our services, you agree to our use of cookies.