The name “Delvera” was chosen by popular vote of the citizens on 29 May 2013, and is based on the Spanish phrase del verano (of summer), in reference to the fact that many significant events in the nation and its predecessors have historically occurred in the summer. False etymologies include speculation that this name was derived either from that of a dwarven city in a fantasy novel or from a creation in the popular sandbox game Minecraft.

The Grand Republic was founded by rebellious regions of the NottaLottan Empire, notably the Commonwealth of Lavrasia on 29 May 2013. For over one year, Delveran independence was unknown to the NottaLottan government, with which Delveran officials did not maintain contact. This early period of Delveran history was marked by extreme isolationism and secrecy, though slow progress was made in developing a government framework and the Delveran Armed Services. By July 2014, First Consul Jordan Brizendine decided to reach out to NottaLotta Acres, which accepted Delveran independence. Late 2013 through 2014 was marked by a slow decline in all of the Provinces except for Lavrasia, resulting in the dissolution of Altaria and a leadership and activity crisis in Avannia.

In early 2015, Brizendine began a new initiative to revitalize the stagnant nation. This involved a series of internal reforms and the expansion of Delvera's online presence, culminating in the Grand Republic joining the MicroWiki Community on 13 June 2015. This growth spurt saw the establishment of the Provinces of Colo and Germanija, the creation of the Lavrada Bannerman, the large-scale opening of diplomatic relations, and the revitalization of the military, among other achievements.[1][2] The first official election was held in August, legitimizing Sarkozy's and Casey Pemberton's positions in the Consulate.[3] Late 2015 saw Dylan Callahan, former Secretary Secretariat of NottaLotta Acres, apply for citizenship. A wave of ex-NLA immigrants followed over the course of the next few months. In December, Callahan founded the Military District of Neosho amid some controversy.[4]

In April 2016, Brizendine began reorganizing his cabinet.[5] In May, newly appointed Minister of Commerce Callahan initiated the Callahan Plan, a strategy to increase activity and government functionality, as well as jumpstart the economy.[6] Despite minor setbacks, the Plan was initially successful. After Casey Pemberton's victory in the July 2016 Consular Election, Delvera entered into a period of almost total inactivity referred to as the Wernher Activity Crisis for nearly two months, before reemerging in early September with a renewed burst of military, diplomatic, political, and economic activity.[7]

On 01 September 2016, the Grand Republic annexed NottaLotta Acres after the former had dissolved its government.[8] On 11 Septemberh, the Chamber ratified the Declaration of Delveran Independence and the Articles of Open Affiliation, documents which outlined the nature of the Delveran State.[9] Later in the month, the Territory of Avannia was disestablished, Colo renounced provincehood and became a Territory of Lavrasia, and the District of Norden left the Grand Republic.[10][11][12] On 26 October, the former title of "Vice-Consul" was changed to President in order to conform with constitutional amendment.

Early 2017 saw the beginning of the Hyperactivity Crisis, which eventually led to impeachment charges being leveled against Consul Pemberton, President Brizendine, and Minister of the Interior Johnson on 20 February. Pemberton and Brizendine were cleared of all charges, while Johnson accepted a plea deal.[13] In June, the judicial branch and the military were restructured, and the Delveran Criminal Code was adopted.[14][15]

In July 2017, Dylan Callahan won the Consular Election.[16] In August and September, Delvera hosted the Congress of Colo, an intermicronational convention tasked with drafting articles of standardization in the areas of diplomacy, economics, and sovereignty.[17] Diplomatic strife in the Congress led to the Austen Affair, wherein tension between Delvera and Austenasia led to the eventual withdrawal of Delvera from MicroWiki.[18][19][20] In late 2017, the North American Confederation applied to merge with the Grand Republic. However, concerns over taxation led to them suspending the application for the present time.

In February of 2018, Curo banknote designs were officially finalized and released.[21][22] The following month, the Territory of Heremus was established in southern California's High Desert region as a territory of Lavrasia under the administration of Michael Holloway.

The Delveran Constitution outlines the structure of the national government, as well as its permitted applications of power. Additionally, it details the relationships between the various holdings of the Grand Republic. The Writ of Rights is a companion document that enumerates specific civil rights guaranteed to citizens of Delvera, as well as further checks on the power of the national government. The Delveran government is made up of two primary bodies between which power is divided: the Consulate and the Chamber of Deputies.

At the head of the Consulate is the Consul, who is elected annually. The Consul is responsible for appointing confederal officials, except for the President and overseeing their duties. The Consul also serves as the Supreme Commander of the Delveran Armed Services, and is responsible for convening the Council of Governors when necessary. The Cabinet is made up of the Consul, President, and Ministers of State, Commerce, the Interior, and Justice. The Council of Governors consists of elected Governors from each Delveran province, and serves as an advisory council and upper legislative body. It also serves as High Court when a majority of Chamber members have recused themselves from a trial.

The Chamber of Deputies[edit | edit source]

The Grand Republic is nonpartisan, thanks to the staunch belief that political parties cause unnecessary, often disastrous division within a nation.

The Delveran Armed Services are the primary defensive forces of the nation. They are composed of the Grand Republican Army of Delvera, Navy and Air Force, although for reasons of practicality, the latter two have not yet been formally established. Each Province is encouraged to maintain its own military force, which could compliment the national armed forces in the event of an emergency. In addition, these Provincial Militias could respond to situations within a particular Province much more rapidly than their federal counterparts. The DAS has never engaged in conflict with another nation, but regularly holds simulated battles among itself during quarterly training exercises.

The official currency of the Grand Republic is the Curo(₡), formerly the Waadas. There are no subunits, so the value of a single Curo is very low. Unlike most of its micronational counterparts, Curo banknotes are not fiat, but backed up by bullion in the national treasury. The current value system is the copper standard, in which one ounce of pure copper is equivalent to ₡50. Due to the changing nature of the bullion’s value, the Ministry of Commerce recalculates the international exchange rate once per month. The primary industry in Delvera is agriculture.

Regions of the Grand Republic are divided into four categories: Provinces, Territories, Military Districts, and Dependencies. Provinces are essentially sovereign nations with equal status that have agreed to unite under the national government, which has limited power over them. Territories are semi-autonomous areas protected by a Province that have more limited powers. Military Districts are regions directly controlled by the Delveran Armed Services and overseen by a Military Administrator appointed by DAS High Command. Dependencies are other nations that sign a temporary treaty with the Grand Republic as they are beginning or going through a period of transition. Other special relationships with regions such as the Republican Military Protectorate may also exist through Constitutional mandate.

The official position of the government is that the Grand Republic does not recognize other nations on the basis that a nation does not need recognition to exist. It does not sign recognition treaties with other nations as a result. However, Delvera does maintain formal and informal friendships with other countries on an individual basis. On rare occasions, it may also enter into a defensive military alliance with another state, but only if the two nations can physically assist one another in the event of a crisis. As of 29 September 2016, the Grand Republic does not enter into relations with simulationist states or nations that do not control any of their claimed territory.[23] 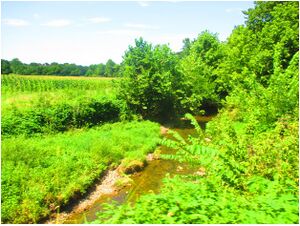 A creek and cornfield in Colo.

Delvera has an extremely variable humid continental climate with four well-defined seasons. Summers are often hot and humid, while winters are usually cold and dry, with springs and autumns falling somewhere in between. This being said, variations from the norm are common. The Summer of 2012 was marked by a two-month drought, while the Winter of 2012-13 saw heavy snowfall. The highest recorded air temperature was 115 degrees F (46.1 degrees C) in July 2012, while the lowest recorded temperature was -26 degrees F (-32.2 degrees C) in January 2011. The largest recorded snowfall was 17 inches (43.2 centimeters) in February 2013. The Delveran Heartland is located in the region of North America known as “Tornado Alley” and can experience severe thunderstorms with high winds that can produce large hail and tornadoes, usually in the spring and summer. It can also suffer blizzards and ice storms in the winter.

Delvera is largely rural, though it also encompasses territories in suburban areas. The topography includes high flatland regions, rolling hills, floodplains, small streams and rivers, and steep river bluffs. The New Madrid Seismic Zone is located in close proximity to Delvera, and has been known to produce earthquakes. The largest ever experienced by current citizens was a 4.0 in 2009, though the region has historically produced events above 8.0.

Most of the nation is composed of forests interspersed with open fields and various small bodies of fresh water. Being located in a temperate zone, a majority of the trees are deciduous and shed their leaves in the winter. However, large stands of evergreens, particularly Eastern Red Cedar, also exist. Delvera has great biodiversity, with thousands of extant species of plants and animals. Some citizens of the Grand Republic actively take part in conservation efforts and attempts to maintain the natural order. There is a significant anti-littering movement within the nation, and many citizens take part in volunteer service projects to rid roadsides and waterways of garbage.

Delvera adopted its current flag on 13 July 2016 by popular vote, replacing the so-called "Old Prussian" flag. Only minor changes to the design, such as hue or detail to the eagle device, have been made since then. The national anthem of the Grand Republic is Oh, Fatherland. The song is a point of Delveric pride, because the piece was composed by a Delveran citizen. The song is intended to be a blend of a religious hymn and a nationalistic march.

English is the official language of the Grand Republic. German and Chinese are unofficial, but recognized languages. This is due to the fact that several Delveran citizens can speak these languages, but they are not widespread enough to warrant use in official formats. Despite this, several words and phrases are used in everyday speech by some citizens.

Religion is important in the lives of many Delverans. Though the majority of citizens are Protestant Christians, the Grand Republic does not have a state religion. This is in order to promote peaceful coexistence between the denominations of the Christian church and with other faiths, as well as to protect religious institutions from the bureaucracy and corruption that often accompany state interference in such matters. Several Delveran citizens hold great respect for Judaism, Buddhism, Daoism, and the beliefs of various indigenous peoples, though no citizens actually practice these.

Offical Delveran Press releases are typically announced on the official Facebook page, as well as the News section of the Delveran government website.

The Lavrada Bannerman is a newspaper that reports on national and local events in Lavrasia. It began as an online publication that was updated semi-regularly, and expanded to printed versions in early 2018. The first article was published on 27 July 2015. In A rival publication, the Germanijan Times, was established as a regional paper in the Province of Germanija on 09 August 2015. Both papers signed a media concord in late August in an effort to preserve cordial relations and friendly competition between them.

Retrieved from "https://karniaruthenia.miraheze.org/w/index.php?title=Grand_Republic_of_Delvera&oldid=8312"
Categories:
Cookies help us deliver our services. By using our services, you agree to our use of cookies.