Great Kingdom of Segacia (Portuguese: Grande Reino da Segácia) or simply Segacia was an enclave non-sovereign micronation existing within the Portuguese Republic between 2003 and 2005. It was based in the now Lomellina Consolato, a territory of the Principality of Lomellina. The Kingdom was controlled by the two brothers D. Guilherme I and Alexandro II and IV as a Diarchy monarchy.

The Great Kingdom was to give the idea of a mighty micronation that ruled, commonly associated with the monarchs's ambitions and "Segacia" derives from "Sega", a commonly spoken word to identify a place or a territory between the monarchs.

In the middle of 2003, two brothers decided to create a Kingdom in wich they could simulate a Diarchy monarchy inspired by the Principality of Andorra in wich they admired at the time. Then the two established a name and founded 3 cities within the kingdom the first being Center Segacian Base where the goverment would meet and take decisions for the better of the nation. Then the Bed Highlands was founded as the monarchs royal castle, and the Green Viewpoint as a touristic spot of the kingdom. Later the government was created and a Council of Nobles was established and a representative appointed. By the end of November 2004, Segacia already had 38 citizens including the ruling monarchs.

In December 2004, the two monarchs entered in conflict. The disagreement between the two began with the debate between the laws and the type of government to be established in the Great Kingdom of Segacia. D. Guilherme I voted for an Absolute Monarchy while Alexandro II and IV supported the Constitutional Monarchy. After weeks of no common agreement both brothers created the Northern and Southern versions of Segacia, each one with the ideas of both leaders. After a year of war the result was the complete separation between the North and South dividing the kingdom into two. 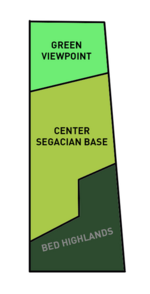 Map of the Great Kingdom of Segacia.

Segacia was a Diarchy monarchy. Diarchy is a form of government in which two individuals ("diarchs") are joint heads of state. Most diarchs hold their position for life, passing the position to their children or other family members like a regular monarchy. The two monarchs had the same power over the kingdom and both had a major impact in opinions from the Council of Nobles.

The Segacian military was only composed by the Segacian Infantry with 20 active soldiers wish defended Segacia until their separation in the Great War of Segacia divided into the Guilherminians and the Alexandrians.

Segacia was based in a ~10 m² room divided into 3 areas (also called cities) each of them having a major function for the kingdom:

The Great Kingdom of Segacia held a few diplomatic relationships, some in a positive way. These were divided into 3 groups: Allies, Enemies and Neutral Pacts.

Retrieved from "https://karniaruthenia.miraheze.org/w/index.php?title=Great_Kingdom_of_Segacia&oldid=191"
Cookies help us deliver our services. By using our services, you agree to our use of cookies.