D. Guilherme (Spanish: Don Guilhermo, Italian: Don Guglielmo, German: Don Wilhelm), GMBGO GMAOGG KAE KCOFL (Saint Peter, Madeira - 31 July 1995), was the 13rd Prince of Lomellina, "The One" (Portuguese: "O Tal") and the first and last Minister-President of Ruthenia and Duke of Libertia.
He inherited the Town-city and capital of Lomellina, Castello di Valle after his discovery that he descent from de Lomellinis, a powerfull and mighty Italian family who had great posessions and were founders of numerous villas arround Pavia, one of them being Valle Lomellina, where Castello di Valle is located.

Andrea Guilherme Moniz Viera was born at the end of July, 1995 in São Pedro, Portugal second child to his father Joseh Locio Viera and first child to his mother, Siera Moniz Veloza. He was baptized in the Church of Boa Nova in 1996 making him in the eyes of his family a Catholic Christian until is 16th birthday turning into a Deist. Andrea always developed a great interest of History since elementary school and started imagining him as a King of his own country.

Establishment of the Segacias[edit | edit source]

In the middle of 2003, Guilherme and his brother Alexandro decided to create a Kingdom in wich they could simulate a Diarchy monarchy inspired by the Principality of Andorra in wich they admired at the time. Then the two established the Great Kingdom of Segacia and founded 3 cities within the kingdom the first being Center Segacian Base where the goverment would meet and take decisions for the better of the nation. Then the Bed Highlands was founded as the monarchs royal castle, and the Green Viewpoint as a touristic spot of the kingdom. Later the government was created and a Council of Nobles was established and a representative appointed. By the end of November 2004, Segacia already had 38 citizens including the ruling monarchs.

On December 2004, the two monarchs entered in conflict. The disagreement between the two began with the debate between the laws and the type of government to be established in the Great Kingdom of Segacia. D. Guilherme I voted for an Absolute Monarchy while Alexandro II and IV supported the Constitutional Monarchy. After weeks of no common agreement both brothers created the Northern and Southern versions of Segacia, each one with the ideas of both leaders. After a year of war the result was the complete separation between the North and South dividing the kingdom into two.

Since his teenhood he began studying the Italian culture, later, faling in love for it and started searching for his ancestry in hope of founding royalty blood. That dream came true when by the age of 18 he discovered Spanish, Italian, English and Scotish ancestry confirming it later when he inherited a castle in Villa Lomellina that belonged to the Lomellini family a branch of Andrea's ancestry. And that's when he started founding the Principality of Lomellina, self-proclaiming him it's Prince. 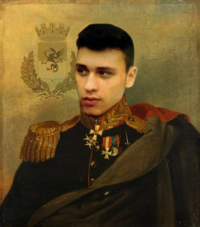 Oficial portrait of D. Guilherme I while Prince of Lomellina.

Known as D. Guilherme da Lomellina e Berenguer after founding his principality, started claiming no-owner territories such as 3 islands in Antarctica and a colony in planet Mars, growing his influence in the Micronational world. At 8 August 2014 the Treaty of Planasia was signed for the recognition of Scandia Colles by the Union for the Claims of Extra-Terrestrial Land (UCETL) as Lomellinian territory and Lomellina gained membership in the European Community of Micronations followed by Micronational Monarchies Organization (12-08-2014), European Micronational Culture Organisation (12-08-2014) and Organization of Micronations (13-08-2014).

In 21 August 2014, Lomellina claims yet another martian colony, Acidalia Planitia in wich the treaty of Planatia for the UCETL recognition is currently being arranged. On 1 September 2014, he founded the Intercontinental Micronational Alliance with more 7 member states with the goal of extending Lomellina's recognition and diplomacy relations. The organization however suffered bad criticism and was forced to disistablish and turned into Castello di Valle Treaty with the same effects.

On the 20 November 2014, the Lomellinian Aristocracy proposed a government change in wich the High Chanceller Richard Abreo-Louis had complete ruling power over the aristocracy members and thus the government would change from an absolute monarchy to a constituional one. This decision didn't pleased D.Guilheme I and his family, since the prince was an open minded person and always agreed on aristocracy's decisions dispite being an absolute monarch.
This denial caused the aristocracy to protest and started an anti-absolutist campaign against the prince on the 26th November. The same day, the Lomellinian Revolt began, "crowning" Richard Abreo-Louis as the constitutional successor to the Lomellinian Throne. On the 1 December, D. Guilherme I was overthrowed by Richard Abreo-Louis after the capture of Castello di Valle, Lomellina's capital city.

After the end of the Lomellinian Revolt, Richard Abreo-Louis was crowned constitutional prince of Lomellina for 3 days. After 4 December, Richard turned the nation into a State in wich the only territorial posession was Castello di Valle, thus creating the State of Lomellina.

As for the dethroned D. Guilherme I, he exiled to the Autonomous Kingdom of the Savage Islands, wich was formed by his cousin Dom Francisco de Moniz II. After a week in exile, D.Guilherme, wich took the conclusion that he still held ruling power in Lomellina Consolato started the Duchy of Libertia within the city along with his royal family.

Chancellor of Ruthenia and Duke of Libertia[edit | edit source] 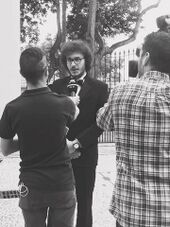 Duke of Libertia being interviewed by Diário de Notícias about his cinematographic work. Madeira Island, 15 May 2018.

On the 30 day of January, D. Guilherme established contact with the current King of Ruthenia, Oscar of the Ruthenians with the idea of annexing Libertia into his project Kingdom of Ruthenia in wich the request was instantly accepted since the two were old friends. Oscar elected Guilherme as Chancellor of Ruthenia and a place between the noble ruthenian houses in wich his consort and brother are also included.

On 23 February 2015, the monarch D. Francesco Moniz II gave the rights and sovereignty of the islands to his cousin D. Guilherme da Lomellina e Berenguer, the then Duke of the Duchy of Libertia and Chancellor of Ruthenia. The Kingdom was transformed into the Grand-Duchy of the Savage Islands and annexed to the Kingdom of Ruthenia since D. Guilherme paid loyalty to the Ruthenian Monarchy. On 19 June 2015, D. Guilherme da Lomellina e Berenguer resigned it's title of Grand Duk inheritade by his cousin due to the fact that the Portuguese Republic and de APC territorial dispute could create diplomatic, political and physical problems to the Kingdom of Runthenia and to the Duchy of Libertia.

His Grace Dom Guilherme da Lomellina e Berenguer, Duke et Prinz of Lomellina and the Libertian Lands, Count of Berenguer and Lord of Moniz, Chancellor of Ruthenia, Baron of Vieira and Count of Imvrassia.

Retrieved from "https://karniaruthenia.miraheze.org/w/index.php?title=Guilherme,_Duke_of_Libertia&oldid=7860"
Categories:
Cookies help us deliver our services. By using our services, you agree to our use of cookies.