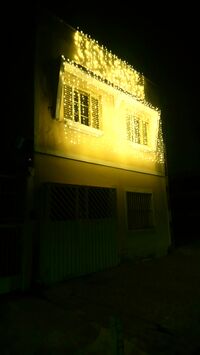 The name Hofbau has its origin in German words Hof, which means court and Bau, which in turn means building, construction. The idea behind the name derives from the fact that as a young empire, the Imperial Court was still being built gradually.

At the time of the foundation of the Kingdom of Ruthenia, the place was called the Winter Residence, whereas the capital at the time was Alto da Solidão and there already was another residence. However, with the transfer of the capital to the south of the Kingdom of Ruthenia, the current Persenburg, formerly known as Royal District, the residence of the dynasty became the seat of the Court and the Government.

In 2016, after the signing of the Karno-Ruthenian Compromise of 2016, the Karno-Ruthenian Empire was established. The Palace continued as an administrative center and at this time it was renamed the Hofbau Palace, remaining the formal seat of the Court and the monarch's workplace, as much as his official residence.

In 2020, the palace was damaged during the 2020 flood in Persenburg. Even though the most emergency repairs have been carried out, the next few years are likely to have more extensive renovations. In December 2020, for the first time in almost twenty years, the palace was decorated for Christmas with more than 1,500 LED lights[1], marking the beginning of care for one of the most important buildings in the imperial capital, which in August 2020, became it is also the seat of the Occidian Monarchy.

Retrieved from "https://karniaruthenia.miraheze.org/w/index.php?title=Hofbau_Palace&oldid=8196"
Category:
Cookies help us deliver our services. By using our services, you agree to our use of cookies.