After the accession of Christian I to the throne of the Carpathia on 02 August 2017, the principality was elevated to the status of Kingdom and, consequently, raising also the ranking of the House of Letzemburg. 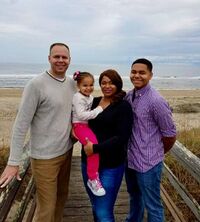 The other members of the immediate family are known simply as "Prince or Princess of Carpathia and Letzembourg".

Line of Succession to the Throne[edit | edit source]

Members of the Family have their own crests, monograms and standards to represent them or their presence somewhere over the Kingdom and foreign countries. The use of them are regulated by the Emperor-King's Own Office and by the Imperial and Royal Academy of Heraldry of Karnia-Ruthenia.

Retrieved from "https://karniaruthenia.miraheze.org/w/index.php?title=House_of_Letzembourg&oldid=3673"
Categories:
Cookies help us deliver our services. By using our services, you agree to our use of cookies.