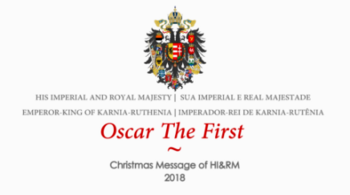 Opening Vignette of the Imperial Christmas Message of 2018. 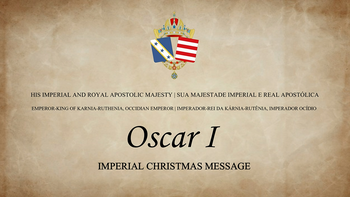 Opening Vignette of the Imperial Christmas Message of 2020.

The idea for a Christmas message from the Emperor-King to his subjects was first proposed by Guilherme, Duke of Libertia, assimilating the British custom of the Royal Christmas Message. On 2014, the then-King of Ruthenia read the Christmas Message; the King was originally hesitant about his skills on perform a full speech in English but was boradcasted anyway. It reached an estimated 130 people.

On 2015, on Christmas Day, the speech was canceled at the last minute due to an unfortunate incident. A Slovak called Matej Boruta, in a neither unjustified nor provoked hatred access, insulted the micronational movement, the Hungarian people and the Queen with racist and derogatory phrases. Sources informed the Government the subject was an "ultra-nationalist" but nothing explained the attack or diminished its effects and considering the offenses were made just minutes before the speech, it was impossible to record that year[2]. To this day, it was the only Christmas message not transmitted.[3].

On 2016, the speech was published on the official website of the Empire, but the records were eventually lost during the transition to the current official website. On 2017, the broadcast, simultaneously displayed in English and Portuguese, was the first to be published in the national forum, the Persenburg Citadel[4]. 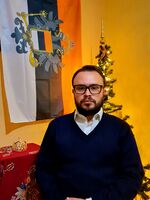 Oscar I during the recording of the 2020 message.

The message typically combines a chronicle of that year's events, wishes for the coming year and a focus on the Empire with the sovereign's own personal milestones and feelings on Christmas and Nation. It is one of the few instances when the sovereign speaks publicly, being the other moment the speech of Day of the Foundation. Planning for each year's address begins weeks earlier, when the Emperor-King establishes a theme and appropriate archival footage is collected and assembled; the actual speech is recorded a few days prior to Christmas.

The messages, recorded in audio or in video, are transmitted through the official channel of the Empire on YouTube and available on the pages of the Empire in social media for a greater reach. It is also customary for the transcribed versions of the speech to circulate. The Emperor generally avoid talk of politics during his speeches, preferring to talk about family values and the holiday spirit, though he did use his speech to mention some important political milestones.

Retrieved from "https://karniaruthenia.miraheze.org/w/index.php?title=Imperial_Christmas_Message&oldid=8268"
Categories:
Cookies help us deliver our services. By using our services, you agree to our use of cookies.