The Imperial Diet, is the legislature of the Karno-Ruthenian Empire since 01 August 2017. It is a bicameral body: the upper house is the House of Peers, and the lower house is the House of Representatives. The seat of the Imperial Diet since its foundation is the Parliament Building in Persenburg, already in use by the Royal Diet of Ruthenia since 2014.

Established by the Imperial Constitution of 2017, in accordance with article 80, Chapter V, the Imperial Diet is the political body with the highest authority in government, responsible for administering legislative power, and is divided into an upper chamber, the House of Peers, and a lower chamber, House of Representatives. The Imperial Diet is governed by its Internal Regiment, which shall be voted by its own members in the first Ordinary Session and is presided by the Palatine of the House of Peers.

The competences of the Imperial Diet are: authorize the declaration of war and the celebration of peace, if approved by 2/3 of its members, override State of Exception declaration, if approved by 2/3 of its members, authorize the ratification of international treaties, authorize the resignation of the Emperor and recognize the Crown Prince, authorize the marriage of the Emperor and the Crown Prince, supervise the activities of the Cabinet, give effect to motion of no confidence, elect by relative majority the Imperial Chancellor and enact constitutional amendments. 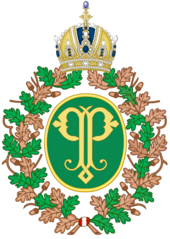 Coat of Arms of the House of Peers.

The competences of the House of Peers are: give efficiency to the Speech from the Throne by voting the Act of Government Goals and Objectives, which should delimit the scope of the Cabinet's actions for the legislative year and approve and reform the bills by relative majority, and constitutional amendments voted in the House of Representatives, in accordance with article 114 of the Constitution. 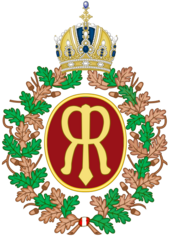 Coat of Arms of the House of Representatives.

The lower chamber consists of representatives deputies elected by direct election and plurality voting from each one of the constituencies of the Empire. The deputy exercises his legislative functions for a term of two years, and loses his political office only by resignation or criminal conviction. The constituencies are determined by ordinary law and should not be numerically lower than the number of seats occupied in the House of Peers. The internal administration of the lower chamber is carried by a presiding board headed by the President of the Representatives and he shall be elected by relative majority in the first Ordinary Session, with a term of one year.

According to the articles 88 and 92 of the Constitution, the legislative process begins in the House of Representatives with the proposal and approval of the bill, and proceed to approval or reform by the House of Peers. Even if the bill is amended in the upper chamber, it will proceed for imperial assent.

No member of the parliament shall at any time suffer legal prosecution on account of his vote, or on account of utterances made while in the performance of his functions, or be held responsible outside the parliaments for his actions in it and without the consent of the parliament, none of its members shall be tried or punished during Ordinary or Extraordinary Sessions for any offences committed, except when arrested in the act of committing the offence, or in the course of the following day.

List of Palatines of the House of Peers[edit | edit source]

Retrieved from "https://karniaruthenia.miraheze.org/w/index.php?title=Imperial_Diet&oldid=6668"
Categories:
Cookies help us deliver our services. By using our services, you agree to our use of cookies.