The Karno-Ruthenian Racing Team also known as the Imperial and Royal Racing Team (KRRT) was created by Oscar I to promote Auto racing in Karnia-Ruthenia. 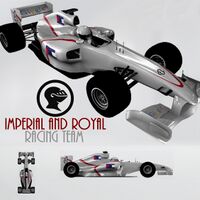 It was founded in 2017 and its headquarters is in Persenburg. The chairman of the Karno-Ruthenian Racing Team is its founder, the Emperor-King Oscar. The races take place on a virtual basis using the Android mobile game engine, iGP Manage.

Retrieved from "https://karniaruthenia.miraheze.org/w/index.php?title=Imperial_and_Royal_Racing_Team&oldid=4462"
Categories:
Cookies help us deliver our services. By using our services, you agree to our use of cookies.