Jordan Brizendine, formerly known by the pseudonym David "Sarky" Sarkozy, is a prominent Delveran politician and military serviceman. He was the founder of Salania and was a primary force for the creation of the Commonwealth of Lavrasia, and later the secession of the Commonwealth from the NottaLottan Empire, forming the Grand Republic of Delvera. Brizendine was also instrumental in the development of the Delveran Armed Services.

Brizendine has been involved in micronationalism since July 2008, when he created the Republic of Salania. In 2010, he entered the MicroWiki community as Emperor of the Holy Salanian Empire. He held several prominent positions in the World Micronational Alliance and the Republic of Atlantis, which he later disavowed over several controversies during the Atlantis Civil War. These issues, in combination with personal disputes between himself and influential micronationalists, as well as hostility toward his political and religious views in the community at the time, led him to dissolve the Empire and leave MicroWiki in early 2011, forming the Grand Republic of Salania. After two months, Salania opted to become a vassal of NottaLotta Acres, forming the NottaLottan Empire.

In July 2011, Brizendine was appointed Lord Governor of the Commonwealth of Lavrasia by Son III, then Secretary of State of the NottaLottan Empire. As Lord Governor, he expanded the citizen base of the Commonwealth, authored all pieces of legislation, began developing the economy, and rose to be an important figure in the movement to secede from the NLE. Upon establishment of the Grand Republic of Delvera in May 2013, he became First Consul, also retaining his position as Governor of Lavrasia. As First Consul, he wrote the Declaration of Independence from the NottaLottan Empire, the Writ of Rights and the Delveran Constitution. He expanded formal relations with other micronations, notably initiating friendship treaties with nearly a dozen. In October 2015, he was instrumental in resolving the Land Claims Crisis between Delvera and the North American Confederation, authoring the Missouri Compact.

In July 2016, he was defeated in the Consular Election. He became Vice Consul and Minister of State in the Wernher Cabinet.

David Brizendine served as the leader of the Grand Republican Army and Grand Imperial Army of Salania for the entirety of the existence of those organizations (2008-2011), which were largely simulationist. His greatest achievements at that time were creating systems of ranks, flags, and awards. For a short time in 2010-2011, he held command positions in the World Micronational Alliance and the Republic of Atlantis.

He was granted the rank of Colonel in the NottaLottan Armed Forces in July 2011, and given command of the Army of the Commonwealth. He initiated regular training exercises and recruited many prominent service members of the ACL, and later the Delveran Armed Services. Under his leadership, the Army grew from a force of five unequipped, unarmed, and untrained recruits to the preëminent micronational military it is today. He is now Supreme Commander of the DAS, in which he has held Infantry and Field Artillery commands in the Grand Republican Army. He was promoted to the rank of Lieutenant General in the NLAF, but demoted himself back to his original rank after secession in 2013.

Coat of Arms of the Holy Salanian Empire, one of Brizendine's notable heraldic creations.

Brizendine composed and wrote the lyrics for "Oh, Fatherland", the National Anthem of the Commonwealth of Lavrasia and later the Grand Republic of Delvera, in 2012. He also wrote the lyrics to the "Delveran Military Anthem", "Lavrasia Forever", and "Brave Colo", the official song of the DAS, the Lavrasian Provincial Anthem and the Colonian Anthem respectively.

David created several national holidays, including Kingdom of Callaway Day and Patriotism Day. However, is most well-known for conceiving the Delveric Heritage Festival in early 2015. He is also known for creating a few notable symbols, such as the flag of Lavrasia]] and the coats of arms of the Holy Salanian Empire, Lavrasian Military Academy and Colo.

Brizendine is the founder, owner, and current Editor-in-Chief of the Lavrada Bannerman, the foremost news source in Delvera. He has also created all of the Delveran Armed Services' publicity videos to date.

Jordan Brizendine helped encourage Nikias Wernher to develop his idea for the Order of Knights Paragon in early 2015, which he later joined. Later that year on 31 August, he was elected Grand Arbiter of the Order.

Brizendine was offered the post of Consul to Missouri by the Paravian government in late September 2015, which he subsequently accepted. This position makes him responsible for the safety and well-being of Paravian nationals as well as representing and furthering Paravian diplomatic interests within Missouri. So far, the position has been largely ceremonial.

Brizendine has been criticized for losing a large percentage of Delveran documents and historical records through USB mismanagement and several computer hard drive wipes, voluntary and not. Since these incidents, he has become far more cautious in the computer realm. He has also been known for his less-than-strict adherence to Delveran legal procedures, often citing convenience and practicality. 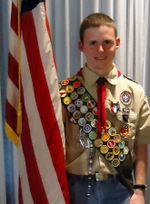 Brizendine was born in early 1995 in Jefferson City, MO. He was raised on a farm in the area, and has long enjoyed nature and the environment. He has always been a fan of music, literature, and the arts, excelling at singing, reading, writing, and musical composition. An interest in history and the military led him to contemplate a career in the latter, and he has received some formal military training. David is an Eagle Scout and a Brotherhood member of the Order of the Arrow.

He is a practicing Christian, and attends a Southern Baptist church. He is politically active in his macronation, voting and taking part in various student political organizations. He considers himself a Libertarian.

Ethnically, David is German, English, French, Scottish, Swiss, Welsh, Irish, and Native American, though his English and Irish ancestries are predominant. He is a descendant of the royal houses of England, Scotland, and France, with a lineage that may trace back to Charlemagne. He also claims distant relation to George Washington and the House of Howe, among others.

Jordan Brizendine is currently an undergraduate attending Missouri State University in Springfield, MO, where he studies History and Chinese. He attended Qingdao University in Qingdao, China as an exchange student for one year, from 2014 to 2015. He can speak and read Chinese at an advanced level, but does not claim fluency.

Retrieved from "https://karniaruthenia.miraheze.org/w/index.php?title=Jordan_Brizendine&oldid=8003"
Categories:
Cookies help us deliver our services. By using our services, you agree to our use of cookies.