Especially popular in the Lusophone sector of micronationalism, the use of online platforms for the practice of eSports was not unheard of within the Empire. Football was the first privileged sport, being the first team, the National Football Team of Ruthenia, created in 2014[1]. Without having played any match, the team was forgotten.

In March 2018, Thomas, Count Karácsony, a successful manager of football teams in the Principality of Maryen, joined the Empire as a citizen and innovated the national sport with Karácsony Football Club and became the first manager of the national team of soccer after the foundation of the Empire. He was succedded by Ulli von und zu Eibenland-Sansbeurg in 2019.

The Karnia-Ruthenia national football team played a total number of 02 official and 1 unofficial internationals since March 2018. All of them played by online platforms. 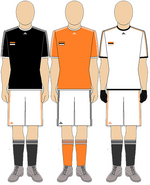 The first known kit to represent the colors of Ruthenia was the uniform of the Ruthenian Soccer Team (2014-2016), the predecessor of the Karno-Ruthenian national football team. It had been idealized at the time that the Adidas AG, the same supplier of the Spanish, the German, Hungarian and Russian national teams, would be chosen to supply the material for use of the selection.

The alternative kit, also known as away kit, was composed by a orange shirt with white stripes in both arms, white shorts with two vertical black stripes in both sides and orange socks.

On 02 October 2018, a new uniform was presented, the first idealized for imperial team. With shades of reddish pink, the civilian flag on one side of the chest and the shield of the team on the other side, it was used during the Karno-Ruthenian campaign during the 2018.2 Lusophone Micronations World Cup and continued into force until 2019.

Retrieved from "https://karniaruthenia.miraheze.org/w/index.php?title=Karnia-Ruthenia_national_football_team&oldid=6068"
Categories:
Cookies help us deliver our services. By using our services, you agree to our use of cookies.