The Imperial and Royal Red Cross of Karnia-Ruthenia, also known as IRCVKR, is the national Red Cross Society in Karnia-Ruthenia. It is the first humanitarian organization in the Empire and is currently headed by Archduchess Denise of Karnia. Empress Paloma of Karnia was the head of the organization from its foundation on 11 November 2018 until . Founded by Oscar I[1], its objectives are raise funds for the International Red Cross, make contributions to organizations of humanitarian aid, and promote philanthropic campaigns and health awareness.

Recalling the sacrifice and untiring work of the members of the Red Cross in the "war to end all wars", the Karno-Ruthenian Red Cross was founded on 11 November 2018 due the believe that we have a place in history and that we must use all the necessary means to make the world a place with less suffering, less anguish, less pain.

Blood for the Empire[edit | edit source]

On 19 November 2018, to celebrate the Empire Day, the Imperial and Royal Red Cross of Karnia-Ruthenia held its first action. A blood donation campaign was held and His Imperial and Royal Majesty, the Emperor-King and Her Grace, Baroness Caroline Eisenland, made a donation to the Hospital of the Public Server of São Paulo. The donation amounted to 920 milliliters of blood.

On 27 June 2019, Their Imperial and Royal Majesties, the Emperor-King and the Empress, with the assistance of His Serene Highness, the Hereditary-Prince of Mortenfeudt raised donations of clothes for the people in condition of vulnerability, on behalf of the Imperial and Royal Red Cross of Karnia-Ruthenia. 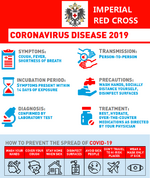 On 16 March 2020, emergency measures against coronavirus outbreak was issued by [2]. The Red Cross, following the macronational agencies suggestions and the text of the decree, started the campaign "Prevention Over Panic" the following day, with a post at the official Twitter account[3]. Foreigners in Karnia-Ruthenia criticized the decree and micronationalists at the Lusophone sector complained that such kind of decree are pointless, but the attitude of the Karno-Ruthenian Red Cross was generally well recieved. The campaign made another post at 22 March[4].

Christian I of Carpathia and Letzembourg along the United States Army assisted civilian doctors and nurses in testing and treating COVID-19, as well as transporting medical supplies, also on behalf of the Karno-Ruthenian Red Cross[5]. On 16 June 2020, Mr. Nicola Pillonetto, Karno-Ruthenian Ambassador to the Italian Republic joined the Civil Protection Department of the Ministry of Health of Italy on behalf of the Imperial and Royal Red Cross of Karnia-Ruthenia to help fight COVID-19[6].

Retrieved from "https://karniaruthenia.miraheze.org/w/index.php?title=Karno-Ruthenian_Red_Cross&oldid=7451"
Category:
Cookies help us deliver our services. By using our services, you agree to our use of cookies.