Acrin, officially the Kingdom of Acrin, is a constitutional monarchy located in North America, headquartered in Metuchen, New Jersey, United States of America. Founded by Eitan Szteinbaum on 04 November 2014, its capital is Pressenberg and since 15 DecembHier 2015, the kingdom is ruled in personal union with the Kingdom of Ruthenia.

During the first four months of existence, the King and his government were devoted to foreign relations, the formulation of their national symbols, which suffered greatly Ruthenian influence and attempts to attract investment and establish connections with other micronations, misguided attitudes that made the inexperienced government of the time lose much of their enthusiasm and credibility. Over the next eight months, no activity was observed and the Ruthenian Government, after several attempts to receive answers, used the position of Oscar, King of Ruthenia in Acrin to assume power in the country and annex it to Ruthenia[1].

Currently, Acrin is part of the Karno-Ruthenian Empire and is at full capacity, and was a member state of the North American Confederation from 10 May 2016 to 21 March 2018.

During the first four months of existence, the King and his government were devoted to foreign relations, the formulation of their national symbols, which suffered greatly Ruthenian influence and attempts to attract investment and establish connections with other micronations, misguided attitudes that made the inexperienced government of the time lose much of their enthusiasm and credibility.

Over the next eight months, no activity was observed. The Ruthenian Government, the greatest ally of Acrin at the time, tried numerous times to contact, either in order to get news or in order to propose a union of crowns led by Ruthenia. In November 2015, when Acrin and Ruthenia would complete one year of existence, King Eitan was appointed to the Order of the Foundation of the Kingdom of Ruthenia. Before the failed attempt to contact the King of his award, the Ruthenian government began formulating a audacious plan. 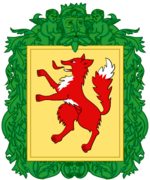 On 19 November 2015, the Ruthenian government issued an ultimatum: either Acrin answer their messages within one month counting of that date, or the King of the Ruthenians, as Aristocratic Chieftain of the Clan of Acrin, would claim the throne for himself. Although this version of events be announced by the Ruthenian government, the first contact attempt occurred through Micronation.org Forum, nine days before the e-mail was sent to King Eitan and the government of Acrin[2].

There was no answer. In the words of King Eitan himself when he made the King of the Ruthenians the Aristocratic Cheftain of the Clans of Acrin, he explained that "You lead all the families as one aristocrat". Based on this interpretation, Oscar of Ruthenia not only was the last active Acrinian noble, as was also responsible for leading the nobility of Acrin. Thus, with the government abandoned, it would be an obligation of Ruthenians to protect the micronation.

Through a special decree of 15 December 2015[3], Oscar of Ruthenia dethroned King Eitan, granting to him, however, the title of Prince Szteinbaum[4]. In the same act, he removed the entire autonomy of Acrin, making the kingdom a little more than a Ruthenian province. Other executive acts were issued by the new king, who ordered new flag, new coat of arms, new capital and advertising his rise, which was greeted with enthusiasm in Ruthenia.

By becoming part of a larger kingdom, Acrin acquired more visibility, even though it cost their entire independence. Ruthenia, in turn, was little benefited, since the so-called Autumn Revolution only increased their territories and announced the start of its most aggressive and imperialist actions.

The change of government has been widely reported, but the reception rendered few responses, most of these positive and exalting the purview of the Kingdom of Ruthenia to the condition of "empire", something denied by the government.

After the Revolution, few real changes were noticed. The establishment of political contacts through Ruthenia was certainly one of the biggest gains, but it was the Ruthenian Constitution that has been applied to the Acrinians which represented the most notable change in the period.

The government also encouraged what was called "Irishment" of national culture. The idea was to promote Acrin as a center of Irish culture, but the plan was phased out after Ruthenia start their own involuntary Germanization process with the creation of the Dual Monarchy between Karnia and Ruthenia.

However, in 2016 the Ruthenian government, involved by the great achievements that involved the signing of the Karno-Ruthenian Compromise, made a great effort to promote Acrin and develop it in a more natural way, more integrated to its American reality.

On the morning of 10 May 2016, the Office of the Prime Minister of the North American Confederation and the Imperial and Royal Government of the Empire of Karnia-Ruthenia announced the Diplomatic Law 008, known as the Acrin Admission Act, which formally admited the Kingdom of Acrin into the North American Confederation with full statehood status. This agreement with the Karno-Ruthenian Empire comes after months of diplomatic talks and negotiations between the Prime Minister Joseph Marx and Emperor-King Oscar of the Karno-Ruthenian Empire[5].

The act designates that the Kingdom of Acrin would enjoy all the privileges of statehood, including representation in the soon to be established national legislature; as well as continue to exist as a kingdom within the Karno-Ruthenian Empire. Emperor-King King Oscar continued to rule as King of Acrin, with the assistance of the first Regent of the Kingdom of Acrin, Christian von Letzembourg.

On 21 March 2018, Emperor-King Oscar I sent to the Government of the North American Confederation an official report announcing that the Imperial and Royal Government had denounced the Acrin Admission Act. As a result, the Kingdom of Acrin would be again administered only by the central government of Karnia-Ruthenia. Once notified that Emperor William I and Prime Minister Joseph Marx received the statement, the Emperor-King made the contents of the communiqué available on the national forum[6][7].

Located in Metuchen, New Jersey, United States of America, is not far from the Hudson River, Upper New York Bay, Newark Bay; on the east, the Atlantic Ocean; on the southwest the Delaware Bay; and on the west the Delaware River. Also, Acrin have two climatic conditions in the state. The south, central, and northeast parts of the state have a humid mesothermal climate, while the northwest has a humid continental climate (microthermal), with much cooler temperatures due to higher elevation.

Retrieved from "https://karniaruthenia.miraheze.org/w/index.php?title=Acrin&oldid=7505"
Categories:
Cookies help us deliver our services. By using our services, you agree to our use of cookies.