The Kingdom of Callaway was, and by some counts still is, a micronation encompassing modern Callaway County, Missouri. The Kingdom was declared in October 1861 during an incident in the American Civil War, making it the oldest micronation in the Central United States. Though there was never an official establishment of government or declaration of independence, the state did gain limited recognition by representatives of the United States government.

The influence of the kingdom story is still strong in the modern Callaway County, with many residents celebrating their homeland’s history. The name is widely known in the state of Missouri and beyond.

On 14 October 2012, the Commonwealth of Lavrasia celebrated the first “Kingdom of Callaway Day” in honor of the sovereignty. This tradition is continued in the Grand Republic of Delvera.

Callaway County was named for Captain James Callaway, a grandson of Daniel Boone. The precise origin of the “Kingdom” prefix is unknown, but it may have been coined by “Prince” Jefferson Franklin Jones.

In the early days of the American Civil War, the state of Missouri was in chaos. Citizens with sympathies on both sides were scattered in pockets around the state. Union General Nathaniel Lyon had ousted the pro-Confederate government in Jefferson City and driven the Missouri State Guard under Governor Claiborne Fox Jackson and former Governor Stirling Price to the southern part of the state before being killed, his army soundly defeated, at Wilson's Creek. In response, Union General John C. Frémont invaded the state with a force of 38,000 troops, forcing the resurgent rebels back. 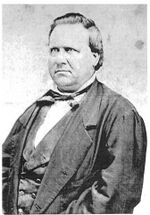 Southern sentiment was especially strong in an area of central Missouri known as “Little Dixie”, of which Callaway County was a part. The county itself had supplied several companies of soldiers to the Missouri State Guard, and was seen as a secessionist hotbed by Union forces. In October, citizens of the county learned that 600 Federal soldiers were planning to invade the county and loot homes in order to “subdue Rebel Callaway”. Callawegian resident, lawyer, and politician Jefferson Franklin Jones quickly moved to assemble 600 troops to counter the threat. A Union newspaper haughtily proclaimed that the Federal soldiers under Brigadier General Chester Harding would be “a great overmatch for Jones’ men” and prophesied “we shall soon har of their rout and dispersion”.

But Callaway was not to be underestimated. Jones, now appointed Colonel, knew that his homeland was in grave danger. He ordered his new army to assemble at Brown’s Spring in north-central Callaway to drill for the coming fight. Though they were poorly armed, possessing only shotguns and small-caliber rifles, they did their best to appear dangerous and well-trained, even creating two or three Quaker guns (logs painted black to resemble cannons) and a homemade oak cannon. This activity was successful at fooling Union spies, whose reports of the strength of Jones’ army caused the Federal commander to postpone his invasion and call for reinforcements.

A Kingdom is Born[edit | edit source]

A seal commemorating the foundation of the Kingdom on the Callaway County Courthouse in Fulton.

In an effort to assess the strength of the Union army, but also hoping to avoid conflict, Jones sent an envoy to Harding with a written ultimatum: if the Federal force would abandon plans to invade and refrain from harming Callaway citizens, Jones would disband his army. What made this request unique was Jones’ insistence that his men were “not assembled in the interests of the Southern Confederacy”. Rather, they had gathered to defend their own homes from what they saw as foreign aggression.

To the Colonel’s surprise, the Union commander agreed to the accord, and Jones disbanded his force on 27 October. The Federal forces moved on, keeping their end of the deal. This essentially amounted to a treaty with the United States government, albeit one which was broken later in the war (Callaway was invaded, and two battles were fought in its territory). However, the region was not ransacked as other places had been, and after the war the citizens stubbornly refused to be Reconstructed or governed by outside forces. Though it is unknown if Callaway was referred to as a kingdom in the negotiation, it was known as such shortly after the incident. Jones himself may have coined the name. As a result of his role in the foundation of the Kingdom, Jones was popularly given the title of Prince, though it is not known if he ever recognized the honorific.

Jones passed away in 1879 in his beloved Callaway, where he is buried in a private family cemetery.

Though the Kingdom practically seceded from the United States, it never formally reentered the Union, and is considered by some to be de jure independent even now.

Screenshot of a television interview at the Kingdom of Callaway County Fair.

In the Grand Republic of Delvera[edit | edit source]

The story of the Kingdom of Callaway, which stood tall in the face of aggression and refused to be bullied out of independence, inspired then-Lord Governor David Sarkozy of the Commonwealth of Lavrasia to enact the III Gubernatorial Decree, naming 14 October as “Kingdom of Callaway Day”. “Surely,” he remarked, “Prince Jefferson Jones was a visionary on par with Norton I, with the recognition and honoring of his creation enduring long after his death. The Kingdom of Callaway is a beacon of hope to all micronations seeking legitimacy or notice among macronations.” The Decree encourages all willing micronationalists to celebrate 14 October, declaring it an intermicronational holiday. This tradition is continued in the Grand Republic of Delvera. 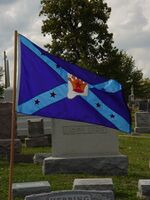 Flag of the Kingdom of Callaway flying at a ceremony honoring fallen soldiers of the American Civil War.

In 1961, the 100th anniversary of the Kingdom’s foundation, the Callaway County Court signed a court order establishing the official flag of the Kingdom. The order is as follows:

"Be it resolved by the County Court of Callaway County, Missouri that a flag having a royal purple background, emblematic of the royalty of the county; bearing two blue bars representing the battles of Moore's Mill and Overton's Run; having its' center on a white background an outline of this county over which there is a golden crown; indicating that this is a kingdom; over which there are five jewels representing the five major rivers in the county, Missouri, Auxvasse, Middle, Cedar and Town Creek; the crown having a red lining representing the precious blood shed by the citizens of this county in the War Between the States; the bars heretofore noted bearing eight stars representing the townships in 1891, they being Bourbon, Cedar, Cote Sans, Dessein, Liberty, Nine Mile Prairie, Round Prairie, and St. Aubert; and the center star representing Fulton; be and is hereby adopted as the official flag of Callaway County, Missouri; that upon all public occasions it shall be displayed; that the Kingdom of Callaway Historical Society be and is thereby made the official custodian of this flag which was today viewed by us, and that we hereby grant to aforesaid society the exculsive privelege to make and disseminate all representations of this flag.
Done by order of the Callaway County Court."

The government of the county uses the flag in official proceedings, and a picture of it appears on the Kingdom’s official website.

Retrieved from "https://karniaruthenia.miraheze.org/w/index.php?title=Kingdom_of_Callaway&oldid=7609"
Categories:
Cookies help us deliver our services. By using our services, you agree to our use of cookies.