Michael of Appinfeldt, also known as Michael Cessna, is an American micronationalist, former soldier and author. He is the founder of Lemuria and also the first Duke and founder of the Duchy of Appinfeldt and the first Grand Duke of Nordinsel. He was the second Imperial Chancellor of Karnia-Ruthenia and serve as the second Military Governor-General of Hakodate. 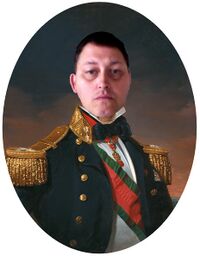 Michael Cessna was born in United States of America, on 28 May 1967 on the banks of the Ohio River. He says he was born "when men had not yet stood upon the surface of the Moon" in order to do not reveal his age. Being raised across the length and breadth of North America gave him unique insights into the vastness of human cultures and societies, which he brings in full measure to his rule of Appinfeldt, which title he came to via his descent from German and Scottish nobility.

Duke Michael served in the United States Marine Corps for six years, and is an author, columnist, instructor in several fields, and is a long-time security professional.

His first experience in micronationalism was the foundation of the Empire of Lemuria, on 09 September 2001 in response to what was seen as the imminent descent of civilization. In the years since, that has only proven to be all the more prudent. In 2002, he was succeeded by Janna I, as Empress of Lemuria. At this time, he was confirmed in his titles as Captain-General of the Realm and as the Duke of Solisia. Also, during this time, both the Order of Shemsu Heru, as well as the Knights of the Lemurian Sword, were established via Imperial Decree, with Empress Janna I assuming the office of Knight Grand Commander of the Bennu and Michael, becoming Knight Grand Commander of the Lemurian Sword[1].

In his presence in Karnia-Ruthenia, he performed many activities, as Head of the Imperial General Headquarters, Minister of War and, after the moment known as "Malaise of Cumagne", was made the second Imperial Chancellor of the national history.

On 06 March 2018, he became the Military Governor-General of Hakodate after the one month rule of Carl, Count Rostrand and assumed this office until 20 December 2018 and 07 July 2018, he was elected to be the first Grand Duke of Nordinsel. On August 2019, he was awarded the Order of St. George and the command of the Leibgarde, a very prestigious position in the Imperial and Royal Court.

His Royal Highness, Michael, Grand Duke of Nordinsel, Duke of Appinfeldt and Count of Breisgau, Duke of Solisia.

Retrieved from "https://karniaruthenia.miraheze.org/w/index.php?title=Michael,_Grand_Duke_of_Nordinsel&oldid=7336"
Categories:
Cookies help us deliver our services. By using our services, you agree to our use of cookies.