Order of the Edelweiss

The Order of the Edelweiss is a dynastic order of knighthood founded in Persenburg by Emperor-King Oscar of Karnia-Ruthenia in 2016, to celebrate the establishment of the Karno-Ruthenian Monarchy after the signature of the Karno-Ruthenian Compromise of 2016 in 10 May 2016 and was created to become one of the most prestigious micronational orders. The current sovereign of the order is also its founder, the Emperor-King of Karnia-Ruthenia. 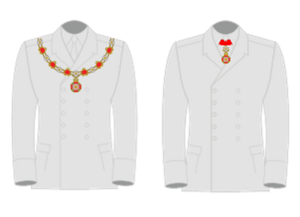 Wearing of the Sovereign and Knights of the Order.

The first known report about the order dates back to 26 May 2016, when it was mentioned in the heraldic description of the new coat of arms of the Karno-Ruthenian Empire. Despite not having been officially established on that date, it goes back to a previous idea. The greatest proof of this is that it consists of official form already inserted in the work of the new armorial; ie its design is older, although having an unspecified date. The probable date of creation of the order, however, is limited by the time gap between the signing of the Karno-Ruthenian Compromise of 2016 on 10 May 2016 and the decree establishing the new national symbols of the Empire, issued on 26 May 2016[1].

The Order of inspiration is certainly the Order of the Golden Fleece, the order of chivalry founded by Philip III, Duke of Burgundy in 1430 and awarded by the King of Spain and the de jure Emperor-King of Austria-Hungary, once being strong the presence of Austro-Hungarian influence in all Karno-Ruthenian institutions. Despite this, the choice for the name actually comes from the Archduke Anton of Karnia. It was he who set the national symbols of Karnia, ended up for choosing the Edelweiss as national flower. Absent a Ruthenian equivalent, the flower eventually became a national symbol and is included in even the insignia of the Armed Forces.

Membership in the Order is strictly limited and includes the Monarch, the Crown Prince, the children of the monarch and various supernumerary members, nationals and foreigners. The Order is solely for royalty and nobility, never being conferred to a commoner to the date. The questions about female inheritance was discussed, but there are no impediments in its constitution, and may eventually have a female Sovereign of the Order.

Sovereigns of the Order[edit | edit source]

Retrieved from "https://karniaruthenia.miraheze.org/w/index.php?title=Order_of_the_Edelweiss&oldid=8307"
Category:
Cookies help us deliver our services. By using our services, you agree to our use of cookies.