Overthrow of the Badakistani monarchy

The overthrow of the Badakistani monarchy was a political revolution in Badakistan, which resulted in the collapse of the Imperial Government and the union of Badakistani State with the United Provinces of Mauricia after the abdication of Emperor Oscar of Badakistan.

After a series of diplomatic misunderstandings that isolated Badakistan to the rest of micronations of Lusophone Sector, even the imperial power came to be discussed and challenged. To contain the general dissatisfaction, the constitution was suspended and the government resigned, making Badakistan an absolute autocracy. 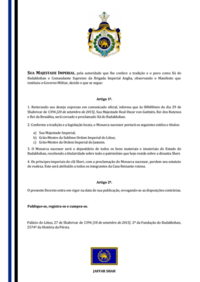 Renunciation to the Throne, by the Shah Jaffar Shah of Badakhshan, 18 September 2015.

The move however would not save the Empire. Therefore, the Imperial House started to search for possible successors. Featuring few allies and in the absence of elegible members in the Imperial House, the so-called Sheri Dynasty, the elected would be a foreign monarch. After days of negotiation, the King of Ruthenia, a personal friend of Shah Jaffar Sheri and one of the few allies of Badakistan, took the throne and the title of Emperor, abandoning the Persian trace, so far, a very characteristic feature of the Imperial House.

The first months of the pro-European dynasty were tumultuous. A massive stampede of citizens left the project. The government was totally weakened and a series of unequal treaties were signed by the previous government. The Lusophone sector, surprised by the rise of the House of Ruthenia, was divided between praise and criticism[1][2][3].

The Kingdom of Bessabia, then part of Ruthenia became part of Badakistan and subsequently absorbed[5]. The Constitution was restored to the people, the government has returned to active members and the clan system to the rise to political positions was banished, replaced by a more democratic system.

Despite Emperor Oscar's reign have been relatively successful and well accepted by most reputable micronations, it was a highly unpopular monarch. His subjects rejected it to see that it was a foreigner who did not identify with the micronation and who cared about the Anglophone sector, more than the Lusophone.

Between the end of November and the first week of December of 2015, the political situation was unsustainable. The return of former monarch Jaffar Sheri brought concerns and uncertainties. Willing to regain the throne, he sought the support of other micronations and garnered support among the aristocracy and the military.

Anticipating the coup through informations from the Ruthenian Secret Service, the Emperor decreed the dissolution of the Majlis, the parliament and took upon himself the command of the armed forces. Provided with dictatorial powers, contacted the Stadhouder of the United Provinces of Mauricia to hand over sovereignty over the territory, ending the Badakistan as an independent and sovereign micronation.

A union treaty was signed in the last hours of the 08 December 2015. The Badakistan became a province of a traditional Brazilian micronation and the then Emperor, deprived of his power, assumed the title of "Hereditary Lord of Badakistan Lands".

The abdication of the Emperor and the end of Badakistan, to have happened relatively narrowly to a small group of people, surprised the Lusophone sector and few attempts to restore the monarchy and independence of Badakistan proved fruitless. Some micronations interested in changing rulers continued publishing the months following the attacks Ruthenian government, but were soon demoralized because they were involved in the coup.

Retrieved from "https://karniaruthenia.miraheze.org/w/index.php?title=Overthrow_of_the_Badakistani_monarchy&oldid=3707"
Categories:
Cookies help us deliver our services. By using our services, you agree to our use of cookies.