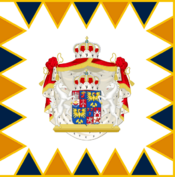 First colour of the I Army.

The history behind the foundation of the Seventh Army begins with the joining of the Duchy of Romitria to the Karno-Ruthenian Empire. The roots of the Romitrian land force was the Armed Forces of Nedland from Nedland, established in 8 May 2015. After the joining to the Empire, the Romitrian branch of military was created in June 2016 to serve as a defensive force of the Empire in the event of conflict. It was disbanded on 09 October 2016, when Romitria seceded from the Empire.

Retrieved from "https://karniaruthenia.miraheze.org/w/index.php?title=Seventh_Army&oldid=6056"
Categories:
Cookies help us deliver our services. By using our services, you agree to our use of cookies.