Weslley Nascimento was born on 31 October 1998, in São Bernardo do Campo, São Paulo, Brazil. He attend São José High School, where he excelled at performance in Historical, Geographic, Philosophical and Sociological Sciences, and has played relevant role and leadership in Student's Council. Currently, he is a student at the Superior School of Business Management. He was introduced to micronationalism through the citizenship request to the Principality of São Vicente, a Brazilian micronation. 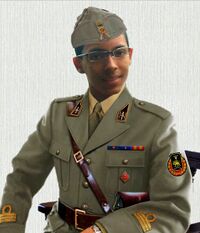 Portrait as General of the Badakistani Imperial Army, early 2015.

After few days, he leaves the Principality and joins Badakistan. On 23 March 2015, Weslley began a trajectory that includes the administration of then Takia region, where he was appointed head of the regional government. As a result, he became Vice-President of the National Parliament, the Majils. It was during his tenure that very important laws were passed, as the Law of the National Day of Religion, the Law of Clenching of National Borders to the Regular Traffic of Foreign and the Jallouli Statute. It was also during his tenure that, for political, civic and military pressures, there was the beginning of the democratization of Badakhshan and its development into a constitutional monarchy.

He was also the first and only Ostandar of the Khanate of Tabriz, then a part of the empire, appointed by Shah Jaffar Shah of Badakistan, exercising it until the end of the first reign, 20 September 2015. Between 11 May 2015 to 15 June 2015, he was Captain of the Angha Brigade, and ceased to be for a short time after an unsuccessful attempt of coup d'etat in which he participated and for which he received after imperial pardon and promotion to Major. During the Ruthenian Rule of Badakistan, Weslley was promoted to General of the Imperial Army on 29 October 2015, with the mission of structuring the military. Successful, the reform was approved by the Grand Vizier of Badakistan.

On 19 November 2015, during the celebration events of the first anniversary of the Kingdom of Ruthenia, it was nominated as one of the first seven "Aide-de-Camp of His Majesty", a title that was revoked later. During the events that led to the end of the Badakistani Monarchy, there were rumors of his involvement in the coup attempt. Discredited by the Ruthenian monarch, he remained in micronationalism as a citizen of the United Provinces of Mauricia for few weeks. 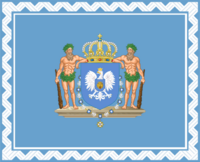 Standard of the Ban of Horvatia.

On February 2015, the former member of the Angha Forces and the King of Ruthenia made peace between them. The resumption of friendship was sealed with the support of the Emperor-King to the new project created by Nascimento, the Kingdom of Horvatia. Subsequently, the Kingdom would be annexed by Ruthenia and its founder was appointed Ban (Viceroy) of Horvatia. He was also rehabilitated as one of the Aide-de-Champ of His Majesty and assumed the title granted by the King, Prince Agram. On April 2016, he became the first Minister of Culture of Karnia-Ruthenia.

During the Ruthenian general election of 2016, Prince Agram competed to the Minister-President of Ruthenia and then to Leader of the House of Representatives. He lost in both elections. Before the elections, he founded the Moderate Party. After the defeat at the polls, he published the "Horvatian Manifest", requiring greater autonomy for the Kingdom of Horvatia. The event led the Empire to a wide constitutional reform. While discussing the reforms, he served as Air Marshal in Lundener Civil War.

On 22 July 2016, due personal questions, Yuri, Count de Faria requested to His Imperial and Royal Majesty, the Emperor-King, to be released from his duties. He left his governamental positions on the same day[1] and was suceeded by the Prince of Agram.

Since 2016, he is the Ambassador of the Empire in Mauritstad, United Provinces of Mauricia and was also nominated as Ambassador in the Emirate of Takia until 31 May 2017. He was made Ambassador to the Lusophone Sector, a position he never assumed and Ambassador to Brazil on 11 March 2016, position he held until 14 March 2018.

The House of Agram, from August 2017, instilled nationalist sentiments in the local population to force its own rise to power. Through long negotiation and good relations between the Imperial Crown the then Ban, the Agrams would ascend to the Throne of Horvatia. In the early morning of 03 September, Oscar I abdicated the throne in favor of Prince Joseph Cicero of Agram, father of Ban of Horvatia and head of the ducal house. Horvatia continued a country within the Empire, but the post of Ban of Horvatia was declared descontinued.

With strong popular pressure to verify the progress promised through the change in the reigning house of Horvatia, King Joseph Cicero abdicated in favor of his son, Duke Weslley of Agram, 25 days after taking the throne. Unable to verify any measure that could sustain his reign, King Weslley abdicated on 03 October, having reigned for only 05 days. He resigned by returning the throne to the Emperor-King of Karnia-Ruthenia.

After the event, the ducal family, and especially the Duke of Agram, abstained from participating in national politics, being exonerated from their posts and leaving for exile.

Retired from the politics in the Empire, he was succeded in join several projects within the Lusophone sector of micronationalism. He succeded Oscar I as King of Eslavija on 22 February 2020 in peaceful agreement.

Retrieved from "https://karniaruthenia.miraheze.org/w/index.php?title=Weslley_Nascimento&oldid=6932"
Categories:
Cookies help us deliver our services. By using our services, you agree to our use of cookies.