He is also a philosopher, a diplomat, a defender of the Monarchical Restoration in Brazil[1] and co-author of works focused on Brazilian Law. Also, as Head of the Council of Regency, he was the first Reichsverweser, from 29 December 2017 to 05 January 2018. He was appointed as the first non-native ambassador of Karno-Ruthenian history, assuming the post in France in 2020.

He was appointed on 09 December 2016 to the newly established Ministry of Justice, the governmental body responsible for implementing actions to provide access to justice, to increase confidence in the justice system, and uphold people’s civil rights. In his nomination, the Imperial Decree n. 063-2016[2] by Oscar I expressed the justification of the choice for the position: a figure of notable juridical knowledge and unquestionable character, being able to administer Justice in the Empire, as well as to undertake the creation of a Court fit for our demands, being a very excellent jurist, of proven quality and very respected. 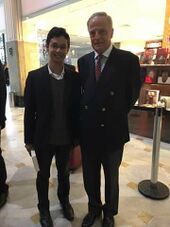 On 27 January 2017, after a series of audiences with the Emperor-King, Hochbach convinced him to create the Court of Justice, which had him as its first president with the title of Palatine of the Court. Thus, he had the great task of organizing the Judiciary Power of the Empire. The next month, Hochbach had a large participation in a campaign for reforms in government that culminated in the February Manifesto, calling for a modern constitution to be promulgated (until then, the two national constitutions had been granted), and then to modernize the rest of the legislation and subsequently modernize the government. 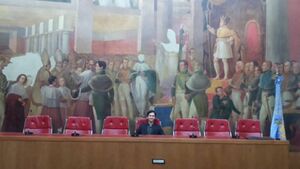 After an audience of more than five hours with the Emperor-King on the night of 09 February 2017, on the following day the Constitutional Commission was established[3]. Presided by Hochbach, the commission was formed by Nicolas Grangier, the former Minister of Foreign Affairs, Christian of Letzembourg, Grand Duke of Letzembourg and Thomas of Cumagne, the King of Cumagne. The works of the Comission ended on 31 July 2017.

For his works to the Empire and loyalty to the Emperor, he was made "Prince of Wigmaransz" on 03 August 2017, title that was made extinct in the following year when Oscar I created the House of Hochbach-Kundarheim and creating the new title of Prince Kundarheim.

During the Democratic Manifestations of November 2018, Hochbach insisted on defending the Constitution against the political leaders of the Patriotic Party who called for the convening of elections by the end of the year and put forward his arguments in a long meeting mediated by the Emperor. After make possible the general elections of 2019, he renounced his position as Minister of Justice on 02 July 2018, being succeeded by Johannis Sauerbronn.

The year of 2020 revealed to be very productive for him, since he received general acclaim after hsi defense of the Brazilian Monarchy[4] and his appointment as Karno-Ruthenian Ambassador to France on 02 April 2020[5]. He was the first ambassador appointed for a country that doesn't born there, although he lived in Rennes since late 2019.

Retrieved from "https://karniaruthenia.miraheze.org/w/index.php?title=Wilhelm_von_und_zu_Hochbach&oldid=7281"
Categories:
Cookies help us deliver our services. By using our services, you agree to our use of cookies.